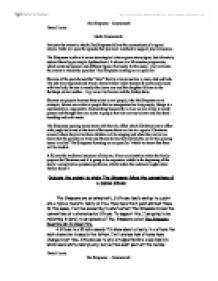 Evaluate the extent to which The Simpsons follow the conventions of a typical sitcom. Refer to a specific episode that you have watched to support your evaluation.

Media Coursework Evaluate the extent to which The Simpsons follow the conventions of a typical sitcom. Refer to a specific episode that you have watched to support your evaluation. The Simpsons confirm to some stereotypical sitcom genre stereotypes, but ultimately subvert them by proving to dysfunctional. A sitcom is a 30 minutes programme, which contains humour and different types of comedy. In this essay, I will evaluate the extant to which the episodes 'The Simpsons roasting on an open fire' Sitcoms of the past showed the "ideal" family; always nuclear a mum, dad and kids. The dad was respected and it had a bread winner mum-housewife cooks and cleans with two kids, the son is mostly the clever one and the daughter follows in the footsteps on her mother. E.g. leave it to beaver and the Cosby show. Sitcoms are popular because they relate to real people, take the Simpsons as an example, Homer can relate to people that an unorganised an lazy people; Marge is a representation, responsible, hardworking housewife; in Lisa we can relate to nerdy person and through Bart can relate to people that are not very clever and like skate boarding and rock music. The Simpsons opening scene starts with the title effect which Christmas snow effect with jungle bells and at the start of the scene there are late to a special Christmas concert where they arrive there children will be singing and when they arrive we know that the parents are tired and Homer drives fast and hits the ...read more.

However although sitcoms started to show other families like a black family in The Cosby Show, they were still upper middle class. The Simpsons was the first sitcom to really show problems faced by working class families. Sitcoms are popular because all ages can watch it for fun and enjoyment; charaters of all ages provide someone for everyone to identify with. The Simpsons are even more popular because as an animation they can also have other celebrity characters such a Barry White and Michael Jacson. The Simpsons episode "Simpsons Roasting On An Open Fire" had an opening sequence where the title came up through snowflakes and jingly music. We hear Marge speaking to Homer saying "Oh slow down Homer!" which shows she is worried. Homer's response, "We don't have time to slow down - we're late" makes us think that he is stubborn, wanting things his way and that he doesn't think too much about the safety of his wife and baby. This opening sequence immediately lets us see that this family is not perfect but realistic. We can see from this episode that The Simpsons does follow the traditional narrative structure. The audience gets orientation from not only the opening sequence but also the next couple of scenes where they were at the school Christmas performance, putting up Christmas lights and the children asking for expensive difficult presents. Evaluate the extent to which The Simpsons follow the conventions of a typical Sitcom The Simpsons are an animated U.S Sitcom family and up to a point are a typical realistic family of five. ...read more.

They have their good and bad times. In this essay, I will be evaluating to what extent The Simpsons follow the conventions of a stereotypical Sitcom. To support this, I am going to be referring in detail to an episode of The Simpsons called The Simpsons Roasting On An Open Fire. A Sitcom is a 30 min comedy T.V show about a family; in a sitcom the main character is usually the father. I will analyse how sitcoms have changed over time, Sitcoms use to only air upper/middle class family's which were white family's only, but as time went past ant the r****m cooled down, they started to air black family's as well, in my opinion The Simpsons are made bright yellow is to make a joke out of sitcoms because sitcoms use to be aired as white people only in the past. The opening sequence in the episode starts with the title "The Simpsons Roasting On An Open Fire" with some jingle bells and Christmas effects. Then it jumps into Homer & Marge driving to their children's concert in dangerous situations. Marge's voice makes her sound really tired, but homers voice just makes him sound silly, not the typical father you would find in other Sitcoms. Marge actually believes that Bart's ironic humour is right; it shows that they must care for Bart more in my opinion. From analysing The Simpsons Roasting on an open fire I have seen that the orientation is getting ready for Christmas expenses. The Simpsons - Coursework Daniel Louis Daniel Louis The Simpsons - Coursework ...read more.