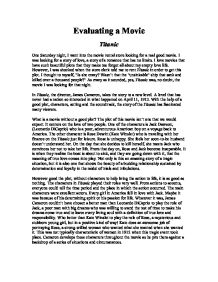 Evaluating a Movie Titanic One Saturday night, I went into the movie rental store looking for a real good movie. I was looking for a story of love, a story of a romance that has no limits. I love movies that have such beautiful plots that they make me forget all about my empty love life. However, I was shocked when the store clerk told me to rent Titanic in order to get this plot. I thought to myself, "Is she crazy? Wasn't that the "unsinkable" ship that sank and killed over a thousand people?" As crazy as it sounded, yes, Titanic was, no doubt, the movie I was looking for that night. In Titanic, the director, James Cameron, takes the story to a new level. A level that has never had a nation so interested in what happened on April 11, 1912. With the help of a good plot, characters, setting and the soundtrack, the story of the Titanic has fascinated many viewers. What is a movie without a good plot? ...read more.

Who better than Kate Winslet to play the role of Rose, a mysterious and stubborn young girl, but in a positive kind of way! Kate does an awesome job of portraying Rose, a strong-willed woman who wanted what she wanted when she wanted it. This was not typically characteristic of women in 1912 when this tragic event took place. Cameron develops these characters throughout the movie as he pits them against a backdrop of a series of situations and circumstances. The setting of this story couldn't have been more wonderful. While looking at the movie and seeing all those people aboard the beautiful ship, laughing and enjoying themselves, you almost forget that this boat will sink and kill most of them. And, what a sight it was! The details of the boat are just fantastic! It looks as if it is still sailing the waters as it did in 1912. I was personally impressed with the scenes of the ship before and after hitting the ice burg. Before the collision, we could see the beautiful chandeliers and expensive china in the first class sections. ...read more.

Baldwin, by watching the movie, Titanic. In the historical account, Baldwin explains in great details the terrible tragedy of the Titanic. He tells the reader how the music changes as the passengers realize their fate. As descriptive as he is, though, he couldn't have captured the attention that movie attracts. Viewers are able to actually see the things Baldwin is trying to get us to visualize from his writing. No doubt, we get a clearer understanding of the events surrounding the demise of that "unsinkable" Titanic by watching the motion picture version All and all, Titanic is a marvelous film. Never before have I seen a movie that captures the facts of what really happened while adding dramatic twists to keep the viewers interested. Certainly, through the plot, characters, setting and soundtrack, the Titanic will forever remain a household name for many. Ladies, looking for that romantic movie that you just can't get your guy to take you to? Titanic is the perfect one! After he sees this fantastic film that is filled with love, romance and full force action, he will agree that Titanic can definitely go down in history as not only a devastating tragedy, but also a classic heart-warming love story. ...read more.