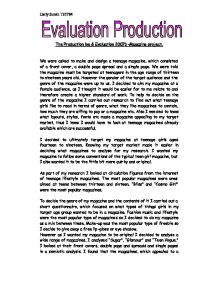 The Production log & Evaluation 2007b-Magazine project. We were asked to make and design a teenage magazine, which consisted of a front cover, a double page spread and a single page. We were told the magazine must be targeted at teenagers in the age range of thirteen to nineteen years old. However the gender of the target audience and the genre of the magazine were up to us. I decided to aim my magazine at a female audience, as I thought it would be easier for to me relate to and therefore create a higher standard of work. To help to decide on the genre of the magazine I carried out research to find out what teenage girls like to read in terms of genre, what they like magazines to contain, how much they are willing to pay or a magazine etc. Also I needed to know what layouts, styles, fonts etc made a magazine appealing to my target market, thus I knew I would have to look at teenage magazines already available which are successful. I decided to ultimately target my magazine at teenage girls aged fourteen to nineteen. Knowing my target market made it easier in deciding what magazines to analyse for my research. I wanted my magazine to follow some conventions of the typical teen girl magazine, but I also wanted it to be the little bit more quirky and original. As part of my research I looked at circulation figures from the internet of teenage lifestyle magazines. The most popular magazines were ones aimed at teens between thirteen and sixteen. "Bliss" and "Cosmo Girl" were the most popular magazines. ...read more.

I constructed all of my single pages on Photoshop as I had a lot of trouble trying to import the background image and the lip-gloss image. I decided it would be easier and save me a lot of time if I constructed the entire page of Photoshop. I used digital cameras to take all of my original images in the media studio we have at college. I used a tripod for some of my original images but found it easier to hand hold the camera in some instances. My front cover image is a medium shot of my model from the shoulder upwards. I used a medium shot to the show the facial expression of my model clearly. The large main image on my double page is a large close up of my models face. I decided to use a large close up as I wanted the shot to look high fashion, and I wanted her facial expression to be defined clearly. Also I wanted her eyes to stand out and the grab the reader's attention. For the smaller picture on my double page I used a close up the models face. I had the model looking away so her hair fell across her face slightly and we could only see part of her face. Once again I used this technique as I wanted the photograph to look high fashion and professional. I took the photographs in black and white mode merely as an experiment. I was very please with the effect and decided to use them instead of colour images. For my single page I decided to use only a picture of lip as I was doing a lip gloss advert. ...read more.

I feel that they look professional. They turned out how I intended them too and stick to the conventions of a teen magazine. However my single page was harder to achieve. I did not have a clear idea of what I wanted to achieve despite analysing other adverts and single pages that I found in already existing teen magazines such as "Sugar" and "Teen Vogue". I eventually decided to do a make up advert, and as I stated earlier only decided on the type of product through inspiration. I completed my single page relatively fast. However I soon realised that if I was going to do a lip-gloss advert I needed to have some lips in it. I then hurriedly took pictures of some lips and edited them to put onto my advert. I feel that advert is aimed at a slightly older more mature audience than the majority of my target readership. However many girls these days try to be older than they actually are. Therefore the advert may appeal to them after all. Overall I am pleased with the out come of my single page. I feel that it is sophisticated and look professional. It is bright and eye catching but is not tacky. My aim at the beginning of this project was to make a realistic looking teenage magazine consisting of a front cover, a single page spread and a double page spread. I feel I have achieved this to the best of my ability. I did several drafts and a lot of research and planning. I have had positive feed back from my family and friends. However there are a few things I would have done differently. The main thing I would have done differently would have been to manage my time better. Word count: 2853 Carly Smith T31784 ...read more.