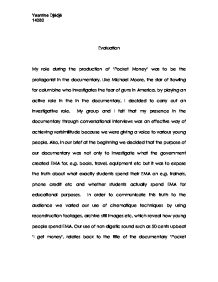 Evaluation of my role during the production of Pocket Money

Evaluation My role during the production of 'Pocket Money' was to be the protagonist in the documentary. Like Michael Moore, the star of Bowling for columbine who investigates the fear of guns in America, by playing an active role in the in the documentary, I decided to carry out an investigative role. My group and I felt that my presence in the documentary through conversational interviews was an effective way of achieving verisimilitude because we were giving a voice to various young people. Also, in our brief at the beginning we decided that the purpose of our documentary was not only to investigate what the government created EMA for, e.g. books, travel, equipment etc but it was to expose the truth about what exactly students spend their EMA on e.g. trainers, phone credit etc and whether students actually spend EMA for educational purposes. In order to communicate this truth to the audience we varied our use of cinematique techniques by using reconstruction footages, archive still images etc, which reveal how young people spend EMA. ...read more.

Similar to Spike Lee's 'When the Levees Broke' where his absence in the documentary allows the 'black voice' to speak through the victims, journalists, actors etc, we have also tried to simulate this effect by removing the central character form certain sequences. For instance, in the 'How do you spend your EMA?' montage the absence of the central character reassures the audience that the information about EMA is not just coming from us, the producers, but from the real young people. The genre of our documentary could also be performative as well observational in that the protagonist plays a committed role in the documentary. In 'Pocket Money' I did not only interview the students but I performed as a character (Post office scene) to create a close relationship between the audience and myself. When Michael Moore in Fahrenheit 911 goes to visit the dead soldier's families we realised that the audience felt attached to Michael Moore, and as a result, we created this effect by presenting the main character as the Hero of the documentary. ...read more.

This shows that our documentary is objective in that we accept everyone's opinions as we are aware that some members of the audience will have different opinions about EMA and how it should be spent. Despite the fact that we had problems with forming the narrative of 'Pocket Money' at the beginning of our production we managed to create structured narrative whilst editing. The documentary begins with central character walking up to the post box, and ends with central character posting the EMA envelope. In this way I think that we have used Propps theory of a constructive narrative effectively to form the equilibrium of our five minute documentary. On the other hand, if we were to re-shoot the documentary I feel that there were certain parts of our documentary which we could improve such as different types of interviews, varied camera shots, angles movements etc. Overall, I feel that editing 'Pocket Money' not only enabled me to apply my theoretical knowledge of documentary to the practical side of the unit, but it has given me experience which I can use in the future. ...read more.