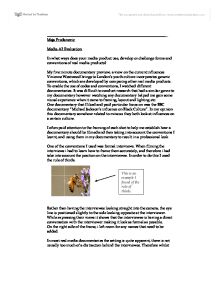 started out, and explains the influences she has had on the current youth culture in London as well as how she has inspired many individuals. Therefore to demonstrate this through a poster I used a black & white effect on Vivienne Westwood and in her body, placed colourful images of the different sub cultures that represent her influences. The contrast in colours makes the poster stand out and grab the audience's interest. The image of the different individuals representing a diversity of trends In the current culture of London fashion are the people that would have been interviewed if my documentary was longer, however it would be relatively insignificant to do this as it is only a 5 min clip. My other ancillary task, the radio trailer, was slightly harder in my opinion, as I had to not only inform the audience but also make it sound persuasive to raise awareness of the documentary. In order to make my trailer effective I looked back over my documentary and used sound clips from my interviews that would be useful in the trailer to give it a sense of reality and direction. ...read more.

I believe that from this it has given me more confidence to use the software because I now have the ability to structure a timeline and create a story giving it a narrative. Using Adobe Photoshop for my Poster was not so easy as it was my first time using the software, nevertheless with some practice and hard work I managed to complete my poster successfully. I not only completed it but used media technology to do so. I am satisfied that I have gained new skills. For the title of my poster I used a site called "DAfont" I found this site effective because it had a wider selection of fonts that I could choose from that suited with the overall image of my poster For my interviews it was important that I knew how to go out and actually use a camera. To make sure everything was perfect; I practiced with my partner before shooting. I can definitely say that my camera skills have broadened through learning how to properly take out a camera and attach it to a microphone, tripod and headphones while at the same time making sure the faming and sound is correct. All these new media technologies supported the research, planning and construction of my production project. ...read more.