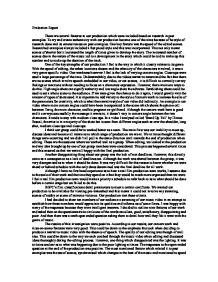 Evaluation Report There are several features to our production which were included based on research in past examples. To try and create authenticity with our production became one of the aims because of he style of research done and its extensiveness on past examples. One key feature was the speed of the edited scenes. Researched examples always included a fast paced style and this was incorporated. This not only meant scenes of shorter but it increased the length of times given to develop the story. The increased number of scenes due to the nature of the music led to a development in the story which could be told to make up this number and to make up the duration of the track. One of the key strengths of our production I feel is the way in which it closely relates to its genre. With the speed of editing, the urban locations chosen and the ethnicity of the characters involved, it was a very genre specific video. ...read more.

I think our group could have worked better as a team. The main flaw was our inability to meet up, discuss ideas and become all aware as to which stage of production we are at. We at times thought different things were occurring and we didn't all pull in the same direction until towards the end of production when editing. These are the sessions where we worked well as a group. When editing, we looked at the production and any idea brought up by one of our group members were considered. This process happened several times and this ensured us that we were all happy with the final production. Another disappointing thing about our group was the lack of met deadlines. However, this directly came as a consequence as a lack of deadlines set. Although the work was shared between the group, it was very disorganised as to when it should be done. ...read more.

This could be down to the emphasis this took when deciding to produce a narrative music video with the absence of speech. The quality of our editing was though of well also. This could be down to the way we each combed through thr music video when editing and discussed ideas thoroughly during the editing process. However, one thing which disappointed was the lighting. It was at times unclear as to what was happening due to the poor lighting at times. The responses to the open ended question at the end of the production was positive. The most mentioned feature which related it to past examples was the use of scenes, synchronised which changes in the beat of the music and mentioned to speed of the editing. The synchronization of the beat to scenes was apparent in the very beginning when the door closes as the heavy beat drops in the music. And the fast paced editing came about as the research into previous examples showed us that it was important to music and music videos of this genre. ...read more.