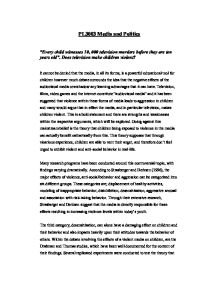 PL3003 Media and Politics "Every child witnesses 10, 000 television murders before they are ten years old". Does television make children violent? It cannot be denied that the media, in all its forms, is a powerful educational tool for children however much debate surrounds the idea that the negative effects of the audiovisual media overshadow any learning advantages that it can have. Television, films, video games and the internet constitute "audiovisual media" and it has been suggested that violence within these forms of media leads to aggression in children and many would argue that in effect the media, and in particular television, makes children violent. This is a bold statement and there are strengths and weaknesses within the respective arguments, which will be explored. Going against this mainstream belief is the theory that children being exposed to violence in the media can actually benefit cathartically from this. This theory supposes that through vicarious experience, children are able to vent their anger, and therefore don't feel urged to exhibit violent and anti-social behavior in real-life. Many research programs have been conducted around this controversial topic, with findings varying dramatically. According to Strasberger and Derksen (1996), the major effects of violence, anti-social behavior and aggression can be categorized into six different groups. These categories are; displacement of healthy activities, modeling of inappropriate behavior, disinhibition, desensitization, aggressive arousal and association with risk-taking behavior. Through their extensive research, Strasberger and Derksen suggest that the media is directly responsible for these effects resulting in increasing violence levels within today's youth. The third category, desensitization, can alone have a damaging effect on children and their behavior and also impacts heavily upon their attitudes towards the behavior of others. ...read more.

Proponents of this idea would argue that whilst violence within the media is substantial, it cannot outweigh the positive influence that non-violent media has on children. Examples of this are: intellectual engagement with television programs and films are effective in stimulating neurological responses in children which allow for faster developmental growth; the interactive nature of computer video games enables more advanced hand-to-eye co-ordination levels and; the navigation and technical skills required for internet usage are effective in further expanding co-coordinative and intellectual development in children. Whilst Australia comparatively has tight policies concerning acceptable levels of violence and anti-social behaviour on television through its Government Agency, the Office of Film and Literature Classification, the unstoppable rise of the internet as a medium is proving difficult to control. The combination of the ease by which information and images can be placed on the Internet and the ease of accessibility of its users, results in a free and unrestricted form of media, which can often promote harmful ideas to children. It has been suggested that government policies need to be updated on a regular basis as a means of finding ways to regulate the Internet, in terms of classification levels for children similar to that of television and films. The development of internet filters, such as Net Nanny and Net-ter must also be researched to examine the role they can play in providing suitable internet resources for children, whilst protecting them from offensive and unnecessarily violent material, which can in turn have adverse effects on their own behaviour and thought patterns. Just as television content, quality and variety has evolved over the last few decades, so to have other forms of media experienced significant change. ...read more.

This author refers to anecdotal and empirical (two studies) evidence in support of such a theory though is quick to point out that such research is quite limited and requiring methodological improvements. While research into such positive correlates of media usage are certainly limited, others have 'strayed from the mob' and investigated possible cathartic and beneficial effects of viewing violence in the media. Recent research by Bohart (2001) extended this idea of release through vicarious experience to television viewing. Durkin (1995) earlier pointed out however, while there certainly are similarities between these two media, effects of viewing should not be extrapolated or related from one to the complementary form. There is no doubt that substantial further research into the possible cathartic effects of media viewing are imperative, while studies such as Brooks' (2000) investigating both forms are strongly encouraged. Aggressive behaviours in children can be attributed to the high levels of violence found within the audiovisual media, and this has been concluded through numerous research methodologies conducted across many different cultures. One cannot however, make the assumption that causes of anti-social behaviour are limited only to this. Behaviour must be viewed on an individual basis and be assessed according to factors including the child's pre-disposition to violent behaviour, their physical environment, and the behavioural patterns they have been exposed to in their upbringing. The argument for the media as a primary source of education for children also cannot be denied. To combat the rising levels of violence in children, recommendations include working closely with government agencies to ensure that regulation of audiovisual media is consistent, developing educational programs for teachers and parents, advocating further research, developing an adequate collection of materials and assisting in the design of surveys to further ascertain the impact that media exposure is having on children today. ...read more.