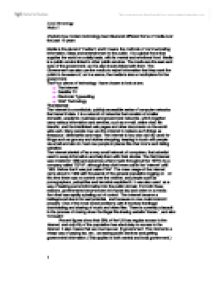 -Explain how modern technology has influenced different forms of media over the past 10 years Media is the plural of 'medium' and it means the methods of communicating information, ideas and entertainment to the public. It is a global force that supplies the world on a daily basis, with its mental and emotional food. Media is a public service linked to other public services. The media are the ears and eyes of the government, as it is also closely linked with them. The Government can also use the media to report information that they want the public to be aware of, so in a sense, the media is also a mouthpiece for the government. The Four pieces of technology I have chosen to look at are, ==> The internet ==> Satellite TV ==> Electronic Typesetting ==> WAP Technology The Internet The Internet is a worldwide, publicly accessible series of computer networks that transmit data. It is a network of networks that consists of smaller domestic, academic, business and government networks, which together carry various information and services, such as e-mail, online chat, file transfer, and the interlinked web pages and other documents on the world wide web. Many people now use the Internet to replace such things as thesaurus', dictionaries and maps. ...read more.

==> There have been high profits for BSkyB (after years of loss-making while the system was developed). WAP Technology This is technology and software, which conforms to a series of international commercial agreements called the Wireless Application Protocol. These agreements standardize specifications and systems for linking different technologies such as e-mail, the Internet and mobile phones. They are part of the accelerating process of media globalization. WAP technology allows instant images and information to be transmitted worldwide. Which is just yet another way for visual news to be quickly spread amongst millions. Electronic Typesetting This is a new media technology. It is the production of books, newspapers and magazines using computers. It replaced the old system of manual typesetting, where a clever craftsman called a compositor fitted each letter of each word of a newspaper or book into a special frame. This took a very long time and was not easy or cheap. Electronic methods also replaced the manual techniques such as screen-printing and lithography, which were used for printing photographs. It came about in 1980. It has many effects the positives ones are; ==> It saved money, replacing print-workers with machines. ==> It improved the accuracy and presentation of newspapers. ==> It saved time: the news in newspapers is now much more up-to-date. The negative effects are; ==> Small newspapers went out of business or we retaken over. ...read more.

This is a diagram of the 'media amplification spiral'. The idea states that certain kinds of events such as rioting and hooliganism can be stimulated and made worse by sensational coverage of the media. An example of how the media affects events is the Madeline McCann disappearance. The McCann's daughter went missing on the evening of Thursday, 3 May 2007 in the resort of Praia da Luz in the Algarve, Portugal. It was the Mccann's themselves that got in touch with the newspapers to report the suspected kidnapping. With the help of the Media, they have been able to publicise Madeline's disappearance worldwide. Millions of newspapers printed pictures of the little girl and information on her, and a phone number to ring if anyone had any information. The media set up a charity fund to help the McCann's in the search for their daughter and enabled millionaires to hear about their cause and sponsor them. So the media has definitely helped to progress their search. However this has also helped the media. By reporting this case, it has helped them to sell papers and made them millions. So both the McCann's and the media have benefited from, the attention. The Media use sensationalism to sell stories. The more sensational the story, the more papers are sold. Sensationalism is a manner of being extremely controversial, loud, or attention grabbing. It is especially applied to the emphasis of the unusual or atypical. Lizzie Brownrigg Media 1 1 ...read more.