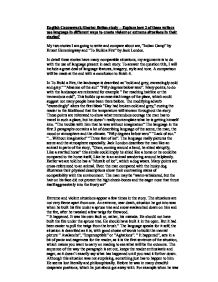 Explore how 2 of these writers use language in different ways to create violent or extreme situations in their stories? My two stories I am going to write and compare about are, &quot;Indian Camp&quot; by Ernest Hemingway and &quot;To Build a Fire&quot; by Jack London.

English Coursework Shorter fiction study - Explore how 2 of these writers use language in different ways to create violent or extreme situations in their stories? My two stories I am going to write and compare about are, "Indian Camp" by Ernest Hemmingway and "To Build a Fire" by Jack London. In detail these stories have many comparable situations, my arguments is to do with the use of language present in each story. To answer the question title, I will include a great deal of language features, imagery, style and tone. A comparison will be made at the end with a conclusion to finish it. In To Build a Fire, the landscape is described as "cold and grey, exceedingly cold and grey." "Absence of the sun" "Fifty degrees below zero". Many points, to do with the landscape are reiterated for example " Far reaching hairline or the tremendous cold", This builds up an essential image of the place, which could suggest not many people have been there before. The modifying adverb "exceedingly" alters the first bleak "Day had broken cold and grey," cueing the reader to the likelihood that the temperature will worsen throughout the story. These points are reiterated to show what tremendous courage the man has to travel in such a place, but he doesn't really contemplate what he is getting himself into. "The trouble with him that he was without imagination" The language in the first 3 paragraphs contains a lot of describing language of the scene, the man, the mood or atmosphere and the climate. ...read more.

He spoke to the dog, which is something he doesn't do at all throughout the story. The situation is largely written in much detail. It lasts nearly two paragraphs, unlike the other situations that were short in comparison. These last two paragraphs, possibly signifies his last situation ever, in other words London is slowly writing him out of the story, saving his best till last. The sentences are fairly long until a full stop occurs. "He glanced down at first in order to assure himself that he was really standing up, for the absence of sensation in his feet left him unrelated to the earth." By having long sentences it keeps the momentum of the story going, at a regular pace keeping the reader that little bit more interested in the outcome. Jack London finally starts writes out the man, " His idea of it was that he had been making a fool of himself, running around like a headless chicken with its head cut-off." This is a simple simile to suggest, his life may be over finally. The man accepts his death "A good idea, he thought. To sleep off to death... There were lots of worse ways to die". He literally moves from desperation to resignation and philosophy. He accepts he has to die and this reflects the only rare time he thinks. "Indian Camp" by Ernest Hemmingway, is an emotionally sparse story, about three people who travel to an Indian camp to help a woman in need. ...read more.

Hemmingway pushes the action story to its limit. He takes it as far as he can by allowing the action to drive the story. Hence the ambiguity, as he can't explain the thoughts, feelings or beliefs, when he hasn't allowed himself that option from the start. In conclusion, the storywriters have completely different styles in terms of writing a story. The feature, similar in both books are both sets of characters enter a strange world, with the characters trying to adjust to their location, using any means possible. Desperation from the man to survive and desperation to keep Nick away from the shocking observations, loneliness in a place not many foreigners go to, inquisition to himself (the man) and from Nick and reservations from the man about not having a partner with him and reservations on Nick coming. The mere fact is, if this were not a foreign place, the individuals would not be as circumspect as they were then. Actions are the key features of both stories. Moreover the authors describe to us vividly a world that we will never experience. If the man thought of his action and went with a partner, would he be dead? If Nick's father did not bring Nick along, would Nick have been introduced to poverty, operations or suicide? This just proves that if you think hard before you act, all will be successful in which neither responsible characters did. The most comparable factor is the language, of the weather is mentioned. Indian Camp is dark and gloomy and To Build a Fire is exceedingly cold and grey. This truly outlines the writer's intentions, to build a lonely approach on the basis of descriptive words. ...read more.