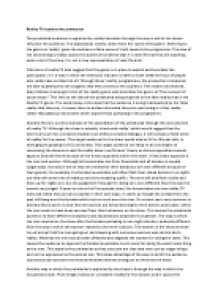 Transfer-Encoding: chunked ﻿Reality TV exploits the proletariat The proletariat audience is exploited by reality television through the way in which the shows influence the audience. The exploitation mainly comes from the name of the genre. Referring to the genre as ?reality? gives the audience a false sense of truth towards the programme. The idea of the show being a reality causes the audience to believe that it is real life that they are watching when a lot of the time; it is not a true representation of real life at all. Criticisms of reality TV also suggest that the genre is in place to exploit and humiliate the participants. It is a way in which the television industry is able to make celebrities out of people who really have no talent at all. Through these ?reality? programmes, the production companies are able to glamourise the vulgarity that they convey to the audience. Film maker and theorist, Gary Oldman is amongst critics of the reality genre who describes the genre as ?the museum of social decay.? This links to the idea of the proletariat being exposed to the false reality that is the Reality TV genre. ...read more.

For example, the female housemates will often flash their naked bodies or on nights out they will wear a lot of makeup and very revealing outfits. The men will also flash nudity and dress up for nights out, but the judgement they get for doing so is very different than the way the women are judged. 5 years on since the first episode aired, the housemates are now reality TV stars and whilst they are all successful in their own ways, it seems as though the ordeals from the past still hang over the females whilst not so much over the men. On screen sex is very common in Geordie Shore and it is clear that the women are still answering for their actions years later, whilst the men seem to have been excused from their behaviour on the show. This causes the proletariat audience to have different exceptions and expectations dependent on gender. The way in which the men reacted on the show after the females partaking in one night stands is evidently different from the way in which the women reacted to the men?s actions. ...read more.

Obviously the partaking housemates have been made to look idealistic and attractive by the production organisation in order to be people that the audience will want to watch. However, this causes many issues in the young viewers and can cause them to be self-conscious and some may even take paths to attempt to achieve these unrealistic looks. The idea of some of the cast mates having ?no skin pores? conveys the way in which the show and its individuals are fake and not realistic appearances or lifestyles for the proletariat to aspire to. The exploitation of the proletariat audience through reality TV is the reality of the genre. With the way in which the proletariat is vulnerable to being exploited by the shows, there is no end to the way in which ?reality? TV can alter the beliefs and values of the viewer through their texts? content. There is little to no limit of what can be broadcasted as long as it is deemed ?reality? which causes conflict and misunderstanding amongst an audience who knows no different than to believe what they are consuming. ...read more.