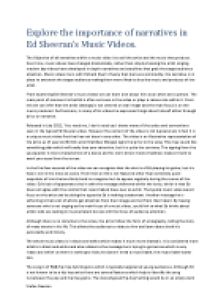 Explore the importance of narratives in Ed Sheerans Music Videos.

﻿Explore the importance of narratives in Ed Sheeran?s Music Videos. The Objective of all narratives within a music video is to sell the artist and the music they produce. Over time, music videos have changed dramatically, rather than simply showing the artist singing, modern day videos have developed in depth narratives and storylines that grab the target audience attention. Music videos tie in with Richard Dyer?s theory that stars are commodity, the narrative is in place to entertain the target audience making them more likely to buy the music and products of the artist. From examining Ed Sheeran?s music videos we can learn a lot about him as an artist and a person. The main point of comment is that Ed is often not seen in the video or plays a cameo role within it. From this we can infer that the artist ideology is not centred on star image and the main focus is on the music produced. Furthermore, in many of his videos he expresses things about himself either through lyrics or narrative. Released in July 2011, ?You need me, I don?t need you? shows many of the codes and conventions seen in the typical Ed Sheeran video. ...read more.

The song is of R&B/hip hop hybrid genre which is typically targeted at young audiences. Although Ed is not known to be a hip hop artist there are several features which help to identify the song in-between the pop and hip hop genre. The stereotypical Hip-hop Setting would be in an empty dark space with not much character, whereas a pop video would have more focus on glamour and luxury environments. In addition, to help target the younger age group, a 17 year old actor has been selected to be the main feature in the video. Lastly, the fast paced camera changes link to the pace of the rap and tempo of the song. The mixture of spotlight, flashing lights, quick camera changes and prominent music beat makes for a very eye catching production that does not follow the usual codes and conventions of this type of media. ?A Team? the first song Ed released, is an example of him using a narrative that deals with a social issue. The narrative follows a young woman who is stuck in a vicious circle between prostitution and drug addiction. By making a video addressing such a serious social issue it gives the impression that Ed is down to earth and in touch with reality. ...read more.

The narrative to the video is a unique way to target the desired audience. The main fan base for Ed?s music is teens and young adults and Rupert Grint will be a common face to this age group as they will be familiar with the Harry Potter series whilst growing up. Toward the end of the video and the track the music contrasts with the behaviour of the character as the character is behaving angrily and erratically whereas the song takes a slower melodic feel. The music video comes across as low budget which could suggest that the artist wanted to focus more on his music than the accompanying video. There are no noticeable costume changes by any of the characters. However there are a number of different locations used throughout this connotes loneliness as he's always by himself in very isolated areas. Additionally a lot of voyeurism can be seen while the music video explores every aspect of the character?s obsession which dominates his life. To conclude, the narratives in Ed Sheeran?s music videos say a lot about him as a person and separate him from other artists in the charts. His music videos and narratives allow us to see that he does not conform to Dyer?s star theory as he does not want to rely on an image to catch audience attention, and consequently features minimally in the majority of his videos. Stefan Newton ...read more.