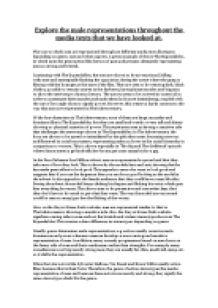 ﻿Explore the male representations throughout the media texts that we have looked at. The way in which men are represented throughout different media texts fluctuates depending on genre, cast and other aspects. A prime example of this is The Expendables, in which casts the great action film heroes of past and present, ultimately representing men as strong and brutish. Continuing with The Expendables, the men are shown to be un-emotional, killing with ease and strategically flanking the opposition during the scene where the gang is filming with the hostages at the start of the film. They are seen to be wearing dark, black clothes, possibly to remain unseen in the darkness, having large muscles and big guns to show the stereotype of action heroes. The actors seem to be covered in water/oil in order to accentuate their muscles and make them look more intimidating, coupled with the use of low angle shots to signify power. ...read more.

In the Paco Rabanne One Million advert, men are represented as proud and that they take care of how they look. This is shown by the models hair and suit, showing that he has made great effort to look good. This appeals to men who want to look good and suggests that if you use the fragrance then you can be as good looking as the model in the advert. It also appeals to the female audience, that they could have a man like this. During the advert, the model keeps clicking his fingers and flicking his wrist, which gets him everything he wants. This shows men to be persuasive and somewhat lazy, that they don?t have to do much to get what they want. The way the model moves around could be seen as camp/gay due the flicking of the wrists. ...read more.

Therefore, the genre of action stereotypes the macho representation of men and because these actors are muscly and strong, they signify the same stereotype which fits the genre. However, sometimes these stereotypes are challenged, especially in Shifty. Shifty?s character is seen to be relatively small and weak however, as the film develops, the audience can see that he is a lot more powerful than his stature shows. This is a contrast to The Expendables and Die Hard etc. because the men in those films are powerful because of their own strengths and build whereas Shifty is powerful because of his intelligence (completing 4 A Levels) and his bravery. Overall, male representations are shown in numerous different ways in different genres and platform. The male stereotypes are seen in many of the media texts that we have looked at, strong brutish men to small and weaker men, but some have challenged this, namely Shifty, which mixes the stereotypes that the audience conforms to. ...read more.