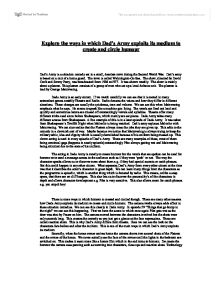 Explore the ways in which Dad&amp;#146;s Army exploits its medium to create and circle humour

Explore the ways in which Dad's Army exploits its medium to create and circle humour Dad's Army is a situation comedy set in a small, desolate town during the Second World War. Dad's army is based on a unit of a home guard. The town is called Walmington-On-Sea. The show, directed by David Croft and Jimmy Perry, was broadcasted from 1908 to1977. It was shown weekly. The show is mainly about a platoon. This platoon consists of a group of men who set up a local defence unit. The platoon is lead by George Mainwaring. Dads Army is an early sitcom. If we watch carefully we can see that it is rooted in many antecedent genres notably Theatre and Radio. Radio donates the voices and how they differ in different situations. These changes are usually the quickness, tone and volume. We can see this when Mainwaring emphasis what he says. ...read more.

outstandingly Pike always getting wet and Mainwaring being ridiculed due to the state of his uniform. The acting in Dads Army is mostly to create humour but the words that are spoken can be used for humour or to send a message across to the audience such as if they were 'posh' or not. The way the character speaks allows us to discover more about them e.g. if they had special accents or catch phrases. But this could happen in any other sitcom. What separates Dad's Army from every other sitcom at the time was that it describes the actor's character in great depth. We can learn many things from the characters as the programme is episodic, which is another thing which is donated by radio. This means, unlike a soap opera, that there are no cliff hangers. This also lets us to discover the personality's of the characters in depth and allows character development e.g. ...read more.

Secondly, when the house owner arrives home the camera shows two second shots of the Platoon and the owner of the house. We never actually see the face of the owner until the lights in the bedroom are switched on. This makes it seem more like a horror film which in the end turns to humour. Do create the humour the camera uses panning such as zooming into characters, close ups and reaction shots. Technology has also effected how Dads Army is created. At the time the latest technology was used to create the opening credits which were cleverly produced to make the audience know that the programme is a comedy right from the start. They did this by using a military operations map with different flags on it. This is emphasised by the chase music in the background. What is hard not to notice is the canned laughter. This is used to circle the comedy just displayed on the screen. It is used in every episode. This can sometimes influence the audience in many different ways. ...read more.