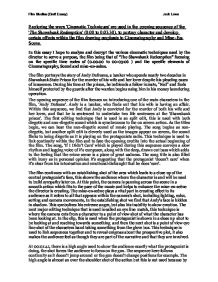 Exploring the ways 'Cinematic Techniques' are used in the opening sequence of the 'The Shawshank Redemption' (0:00 to 0:03.30), to portray character and develop certain effects within the film drawing emphasis to Cinematography and Mise-En-Scene.

Exploring the ways 'Cinematic Techniques' are used in the opening sequence of the 'The Shawshank Redemption' (0:00 to 0:03.30), to portray character and develop certain effects within the film drawing emphasis to Cinematography and Mise-En-Scene. In this essay I hope to analyze and decrypt the various cinematic techniques used by the director to serve a purpose, the film being that of "The Shawshank Redemption" focusing on the specific time codes of (0.00.00 to 00:03:06 ) and the specific elements of Cinematography, Sound and mise-en-sc�ne. The film portrays the story of Andy Dufresne, a banker who spends nearly two decades in Shawshank State Prison for the murder of his wife and her lover despite his pleading cases of innocence. During his time at the prison, he befriends a fellow inmate, "Red" and finds himself protected by the guards after the warden begins using him in his money laundering operation. The opening sequence of the film focuses on introducing one of the main characters in the film, 'Andy Dufesne'. Andy is a banker, who finds out that his wife is having an affair. Within this sequence, we find that Andy is convicted for the murder of both his wife and her lover, and that he is sentenced to undertake two life sentences at the 'Shawshank prison'. ...read more.

match, also called a match cut, is a cut in film between either two different objects, two different spaces, or two different compositions in which an object in the two shots graphically match, often helping to establish a strong continuity of action and linking the two shots metaphorically). The various close-up shots of the gun and the whisky bottle symbolize the state of Andy's life. His situation has lead him to depression, drinking, but most shamefully, the need for revenge. This type of editing allows the flow of continuity to be more smooth and effective. The shots together convey the idea that the protagonist is getting more intoxicated as the scene progresses, this wouldn't have been as obvious without the use of the graphic match. Juxtaposition of color is used to a great effect at 00:02.00. Here, the viewer sees two contrasting images of the protagonist - in the car and in the court room. In the first image, he looks generally scruffy and worn out, his hair is a mess and his tie is loose. In the next image that the audience views there is a vast change; he is in a smart suit, his hair is neat, and his tie is formal. I feel the use of contrasting images juxtaposes the scenes and from this we can see how the different environments have caused a change in formalities - these help to create a visual theme which the viewer can relate to. ...read more.

The effect is defined as; where two different objects are dissolved from one to another, usually the same color or shape. At this point, the gun is obviously not the same color or shape as the protagonist's head but I feel the technique represents a link between the character and the gun, creating a possible enigma?, there is then a panning reaction shot of the crowd as they watch the case unravel, the shot is a straight cut from the previous shot and reveals what the public are thinking about the protagonist. Over this pan, there I also a sound bridge of the lawyer's voice talking to the protagonist. I feel the incorporation of such a technique intensifies isolation for the central character. In Conclusion the film 'The Shawshank Redemption' features a wide range of editing and sound techniques, it uses these to an effect of establishing a mise-en-sc�ne and a complex narrative, The Cinematic Techniques which I mentioned in the title (emphasizing the choice of shot, and camera movement at the moment) have been used extremely well - they enhance the viewer's enjoyment of the film and display the narrative in the best possible way. Film Studies (Draft Essay) Jack Lowe Film Studies (Draft Essay) Jack Lowe ...read more.