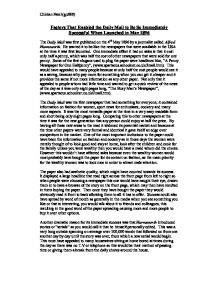 Factors That Enabled the Daily Mail to Be So Immediately Successful When Launched in May 1896.

Factors That Enabled the Daily Mail to Be So Immediately Successful When Launched in May 1896 The Daily Mail was first published on the 4th May 1896 by a journalist called Alfred Harmsworth. He wanted it to be like the newspapers that were available in the USA at the time it was first launched. One immediate effect it had on sales is that it cost only half a penny, which was half the cost of other newspapers that were sold for one penny. Some of the first slogans used to plug the paper were headlines like, "A Penny Newspaper for One Halfpenny", (www.spartacus.schoolnet.co.uk/Jmail.htm). This would have appealed to many people because at only half the cost people would see it as a saving, because why pay more for something when you can get it cheaper and it provides the same if not more information as any other paper. Not only that it appealed to people whom had little time and wanted to get a quick review of the news of the day as it was only eight pages long, "The Busy Man's Newspaper", (www.spartacus.schoolnet.co.uk/Jmail.htm). The Daily Mail was the first newspaper that had something for everyone; it contained information on fashion for women, sport news for enthusiasts, cookery and many more aspects. It was the most versatile paper at the time in a very easy readable form and short being only eight pages long. ...read more.

As the world entered the 20th century and inventions such as the telephone, electric light and photography began to take shape Harmsworth got in their first with his paper to plug these ideas and deploy them to the general public along with the creations of motorcycles and motor cars. Because these were inventions that would affect and even change the world forever almost everyone wanted to know about them and as he was first to publish news about them he achieved the most successful sales. The popularity of the Daily Mail grew day by day and Harmsworth knew that the next step forward was to capture the next idea in human invention, which was avionics. So in order to aim this idea at a mass audience he hired two of the best journalists, Philip Gibbs and Henry Hamilton Fyfe and offered a large sum of money to whoever could fly across the English Channel and from London to Manchester in one flight. But he didn't stop there; Harmsworth himself helped the increasing success of his newspaper by having 10,000 copies delivered by military trucks to British soldiers on the Western Front during the 1st World War. This was a guaranteed 10,000 copies that would be read everyday for as long as the war continued. During the war back in Britain the public wanted to know all the details of what was going on in Germany so to capitalise on ...read more.

It seemed to prove very popular in the working class region as it was far more affordable than the usual "one penny" newspapers. Harmsworth gave the readers of the Daily Mail a wide choice of categories to choose from when reading his newspaper as it had information on all types of news. In aiding the success of the Daily Mail was the fact that it struck lucky because at the time of its launch it was easy to identify gaps in the market and Harmsworth saw this as an opportunity for his paper to fill these gaps and offer the readers what they want in the form of the Daily Mail. Also on top of this the world was entering a new era as it stepped into the 20th century where technology began to flourish by which he was always relaying to the readers of the paper hence increasing sales and becoming ever more successful. The outbreak of the Boer and First World War were tremendous events that could have happened in the eyes of the Daily Mail and its drive to success. Harmsworth saw this and used his innovative business mind to show the events from true eyes of the soldiers as well as setting up a successful charity that drew in even more and more readers to encourage donations reflecting the compassion of the paper therefore helping it to be most popular newspaper at the time. ...read more.