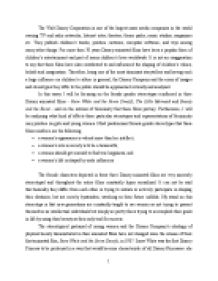 Female gender stereotypes reinforced in three Disney animated films: Snow White and the Seven Dwarfs, The Little Mermaid and Beauty and the Beast

﻿The Walt Disney Corporation is one of the largest mass media companies in the world owning TV and radio networks, Internet sites, theatres, theme parks, music studios, magazines etc. They publish children?s books, produce cartoons, computer software, and toys among many other things. For more than 70 years Disney animated films have been a popular form of children?s entertainment and part of many children?s lives worldwide. It is not an exaggeration to say that these films have also contributed to and influenced the shaping of children?s values, beliefs and imagination. Therefore, being one of the most dominant storytellers and having such a huge influence on children?s culture in general, the Disney Company and the array of images and stereotypes they offer to the public should be approached critically and analysed. In this essay I will be focusing on the female gender stereotypes reinforced in three Disney animated films - Snow White and the Seven Dwarfs, The Little Mermaid and Beauty and the Beast - and on the notions of femininity that these films portray. Furthermore, I will be analyzing what kind of effects these particular stereotypes and representations of femininity may produce on girls and young women. Most predominant female gender stereotypes that these films reinforce are the following: 1. a woman?s appearance is valued more than her intellect; 2. a woman?s role in society is to be a housewife; 3. a woman should get married to find true happiness, and 4. a woman?s life is shaped by male influences. The female characters depicted in these three Disney animated films are very narrowly stereotyped and throughout the entire films constantly hyper sexualized. It can not be said that basically they differ from each other in trying to initiate or actively participate in shaping their destinies, but are merely bystanders, watching as their future unfolds. My stand on this stereotype is that new generations are constantly taught to see women as not trying to present themselves as intellectual individuals but simply as pretty faces trying to accomplish their goals in life by using their beauty as their only tool for success. ...read more.

Apparently, it seemed perfectly ?natural? for the Disney Company to decide upon ?the career? of a housewife for their ?Princesses? to follow. Here, it is quite evident that the only reason for this decision was the promotion of a stereotype that a woman?s natural abilities are those of a ?house servant? and nothing else. The film Snow White and the Seven Dwarfs (1937) clearly promotes the stereotype that women are ?natural-born happy homemakers who live in a state of suspended liveliness until a man gives them a life? (Maio, 1998). The moment Snow White enters the dwarfs? house she feels a natural urge to clean it from top to bottom, in spite of the fact that she does not know who lives in it. This way, she highlights that her true talents and worth lie in her abilities to clean and cook. She uses these abilities hoping that the tenants will provide her with accommodation, and, thus, give her more opportunities to cook and clean ? ?If you let me stay, I'll keep house for you. I'll wash and sew and sweep and cook.? (Hand, Cottrell, Jackson, Morey, Pearce, & Sharpsteen, 1937) It is also worth mentioning that Snow White instantly associates the filth and disorder of the house with the idea that whoever lives in the house does not have a mother. In her mind it is as clear as a bell that if they did, it would be their mother?s role to keep the house in order, since that is a woman?s true calling in life. In spite of the fact that she enters the house in tiny high heeled shoes, she immediately sets to work to clean it, singing all along as though she has merely continued her stroll through the woods. In Beauty and the Beast (1991), the Disney Company use the narrow-minded townspeople to typify Belle?s intelligence and strength as eccentric and to demonstrate the general view of society of the position of women. ...read more.

Her refusal to marry Gaston when he tells her that he is yearning to make her his ?little wife? challenges the standard stereotype, though only temporarily and for the purposes of the happy ending. Belle cunningly ?serves? her refusal to Gaston by telling him what every conceited man wants to hear:?I just do not deserve you.? (Trousdale & Wise, 1991) The temporary false illusion which the Disney Company create here, gives us the impression that they truly think how ?women are ultimately in charge of their fate? (Wynn, 2010). Nevertheless, this animated film, just like the other two, ends in the same, Disney fashion, with ?... and they lived happily ever after!? which once again implies that in order to achieve true happiness a woman has to find and marry her perfect man. The stereotypical messages which these films promote about women being incapable of living without having a man in their lives could have a negative influence on young girls denoting that women are weak and that they can only live a satisfactory life with a man by their side. In spite of the fact that many social changes have occurred over the past century improving the position of women within society, it strikes me that there is still a great deal of s****l discrimination against women widely reinforced through gender stereotypes seen in the media. It is my concern that the gender images in Disney animated films, which take a massive part in children?s culture, have not evolved to match the changes that have occurred in society. Instead, they remain stereotypical and quite similar over the years recurring in the portrayal of each and every of Disney Princesses. Bearing in mind that Disney films have a significant influence on the development of children?s understanding of the world, and that the Disney Company actually profits from children?s false illusions, it is every adult?s responsibility to take a stand against the moral corruption by spreading a critical attitude towards stereotypes and discrimination present in these films. ...read more.

This is a very good essay, but it could do with a slightly more historically contextualised take on these stereotypes. The most important absence in the whole argument is that these are OLD, old stories, and that from the very beginning their role was to inform both girls and boys how to "do their gender properly," by illustrating the rewards for conformity, and to paint a lurid picture of the perils and punishments for failing to conform.

This elision means that in this argument, Disney ends up being made scapegoat for a cultural ideology that runs far far deeper than the pernicious influence of a single multinational media corporation, no matter how huge it might be. It is undeniable that Disney is the absolute acme of patriarchalism in contemporary culture, but they are neither the cause nor the extent of it!