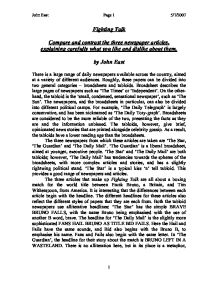 Fighting Talk - Compare and contrast the three newspaper articles, explaining carefully what you like and dislike about them.

Fighting Talk Compare and contrast the three newspaper articles, explaining carefully what you like and dislike about them. by John East There is a large range of daily newspapers available across the country, aimed at a variety of different audiences. Roughly, these papers can be divided into two general categories - broadsheets and tabloids. Broadsheet describes the large pages of newspapers such as 'The Times' or 'Independent'. On the other-hand, the tabloid is the 'small, condensed, sensational newspaper', such as 'The Sun'. The newspapers, and the broadsheets in particular, can also be divided into different political camps. For example, 'The Daily Telegraph' is largely conservative, and has been nicknamed as 'The Daily Tory-graph'. Broadsheets are considered to be the more reliable of the two, presenting the facts as they are and the information unbiased. The tabloids, however, give brief, opinionated news stories that are printed alongside celebrity gossip. As a result, the tabloids have a lower reading age than the broadsheets. The three newspapers from which these articles are taken are 'The Star, 'The Guardian' and 'The Daily Mail'. 'The Guardian' is a liberal broadsheet, aimed at younger, executive people. 'The Star' and 'The Daily Mail' are both tabloids; however, 'The Daily Mail' has tendencies towards the spheres of the broadsheets, with more complex articles and stories, and has a slightly rightwing political stand. ...read more.

The opening paragraph, indeed, is a metaphor (relating to the headline BRUNO LEFT IN A WASTELAND), and the opening line is a simile 'Frank Bruno was like an intrepid explorer trekking the icy waste'. The reporter continues in this vein, describing losing the fight as slipping 'into a crevasse'. The media compares him to an 'intrepid explorer' because an explorer pursues victory for the sake of glory for his country; in a similar way Bruno's bid for the title 'raised the hopes of thousands'. In a different way, 'The Star' also compares Bruno to something else. Although the evidence is unreliable, the writer of BRAVE BRUNO FALLS maintains that the theme from The Greatest Story Ever Told was being played in Bruno's dressing room after his defeat. This would imply to a reader of 'The Star' that Bruno was as great as Muhammad Ali, but also that all great heroes will peak, and then fall from grace at the end of their life. It seems, to Bruno, that this is the end of his life as a boxer. All three of these articles adopt a similar attitude to Bruno - they are proud of him, and do not think of him as a failure. 'The Star' hero-worships the boxer, indeed, it seems that the whole article is devoted to appraisal for the loser. ...read more.

'The Guardian' reveals that there were no press present in Bruno's dressing room, but the writer for 'The Star' makes out that he was present, comforting Frank Bruno, whilst listening to melancholy music and offering advice. As a piece of sports commentary, BRUNO LEFT IN A WASTELAND is very well structured, providing perfectly the right balance of straight facts and description of the men and their conflict. Beginning with a metaphoric simile also sets the article apart from the others, which are more straightforward. It also includes a rather more reliable quote from Witherspoon, which suggests that this reporter had good access backstage. FANS HAIL BRUNO AS TITLE BID FAILS, the third and final article, is a combined mixture of the previous two. It does not contain all the traits of the tabloid, but neither is it highbrow enough to be a broadsheet article. The reporter is clearly a very knowledgeable person when it comes to boxing, but it does mean that the writing becomes a little stilted and dull to read. The description of the fight, though detailed, does have the feeling of reading a shopping list. Collectively, these articles provide good contrast with one another, and an interesting insight into the different styles of newspapers and articles. Nevertheless, they were not the most thrilling read of all time. - John East, Sunday February 22, 2004 John East Page 1 5/7/2007 1 ...read more.