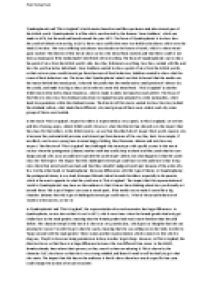 ﻿Haci Suleyman ?Quadrophenia? and ?This is England? is both movies based on real life experiences and also stereotypes of the British youth. ?Quadrophenia? is a film which was directed by the famous ?Franc Roddam?, which was made in 1979, but focused and based around the year 1973. The focus of ?Quadrophenia? is to show how the youth of Britain were acting. In 1973, there was a conflict between two British subcultures which were the Mods & Rockers. The two conflicting subcultures rose doubts to the future of Youth, which is where Moral panic started. The director of this movie shows us how the Moral Panic started, and that there could?ve not been a moral panic if the media hadn?t interfered with everything. The focus of ?Quadrophenia? was to show the point of view from the British youth?s side, how they felt about everything, how they worked with life, and how the youth acted as individuals. Franc Roddam wanted to show a point of view from the British youths, so that not everyone would stereotype them because of their behaviour, Roddam wanted to show what the cause of their behaviour was. ...read more.

On the other hand, in ?Quadrophenia?, there are differences with this type of theme. In ?Quadrophenia?, the protagonist Jimmy is very loud, disrespectful and violent towards his elders, especially to his parents, which is the exact opposite to what the youth are in ?This is England?. The impact that this representation of Youth in ?Quadrophenia? may have on the audience is that it leaves them thinking about how youth really act around them. This type of impact can cause a moral panic, if the media was to make it seem like a big situation. Debates that this type of challenged stereotype could raise is, ?What is the actual behaviour of Youth is in the society we live in?. In ?Quadrophenia? and ?This is England?, the representation of s****l encounter has huge differences. In Quadrophenia, we are shown that it is set in 1973, which were times when the female gender had only got similar laws to the male gender, meaning that the female gender had much more freedom than they did before. The character Steph in this movie is shown as very promiscious, which gave us thoughts that she was abusing her ?power? in order to get what she wants, meaning that she was selling out on her body in order to ?hang? around with the male gender. ...read more.

Comparison of this to ?This is England? is at large because throughout the movie, we can see that all the small subcultures are always using drugs, such as ?Woody? and his group of friends. This type of drug use also shows the audience that this could be a part of the subcultures in todays society. This type of representation leaves the biggest impact on the audience because it shows them that the youth in our generation could potentially be like this in real life which could leave angry elders in todays society. Gerberner stated that overtime individuals, especially audiences became cultivated into believing certain messages to be true. If we apply such theory to the representation of British youth in the media, this could be worrying. Numerous of youth films are largely negative portrayals. In Quadrophenia we see many scenes of anti-social youth, where drug taking is the norm and elders are disrespected for having a point of view. Like this, in This is England smoking pot and vandalising the community with r****t graffiti is portrayed. What is worrying is that if audiences grow up viewing such negative representations of young people them they may become to accept it as true, which would mean that deviance/bad behaviour may be copied and continued. ...read more.