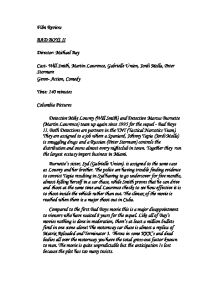 Film Review BAD BOYS II Director- Michael Bay Cast- Will Smith, Martin Lawrence, Gabrielle Union, Jordi Molla, Peter Stormare Genre- Action, Comedy Time: 140 minutes Columbia Pictures Detective Mike Lowrey (Will Smith) and Detective Marcus Burnette (Martin Lawrence) team up again since 1995 for the sequel - Bad Boys II. Both Detectives are partners in the TNT (Tactical Narcotics Team). They are assigned to a job where a Spaniard, Johnny Tapia (Jordi Molla) is smuggling drugs and a Russian (Peter Stormare) controls the distribution and owns almost every nightclub in town. Together they run the largest ecstasy import business in Miami. Burnette's sister, Syd (Gabrielle Union). is assigned to the same case as Lowrey and her brother. The police are having trouble finding evidence to convict Tapia resulting in Syd having to go undercover for five months, almost killing herself in a car chase, while Smith proves that he can drive and shoot at the same time and Lawrence checks to see how effective it is to shoot inside the vehicle rather than out. ...read more.

Therefore a bond is formed as the author tries to persuade and inform the reader. Reviews are also read by people who have seen the film and want a professional view. The personal comments of the write may be shared by the reader or they may differ from those of the reader, either way the reader is engaged in the review. The text is aimed at people over 15, as this is what the certificate viewing is. It is also aimed at people who like comedy and action movies and would like to find out details about the movie before they watch, buy or rent it. The language suits the document as it is colloquial- "major", and contains the views of the writer- "Smith gives a good performance". On the surface the text is about the film Bad Boys II. However there are deeper meaning and attitudes. The authors opinion is expressed openly in this review for example- "I think that Columbia Pictures have only just made this a successful movie". ...read more.

There is also comparison between a scene in Bad Boys II and similar scenes in other major films that had been released in 2003. This shows that the writer has knowledge on the industry and makes a good persuasion tool to influences the reader to agree with the writer. The last paragraph is the author's views on the actors performances. The writer uses a simile- "fit them like a glove", this shows that the roles/characters suited the actors and were played extremely well and were very convincing. The purpose of a review is to inform the reader of a product and to express your own opinions. Ina review the writer must be careful not to give too much information about the plot away. I think that this review achieved its purpose and that the plot was not revealed as the write mentions that there are twists in the plot but does not expose them, this creates anticipation within the reader of what is to come, this is a mild encouragement for the reader to watch the movie and find out. The views express may deter potential viewers so the writer must be careful not to give very strong opinions as people may get offended. ...read more.