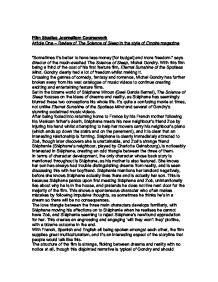 Film Studies Journalism Coursework Article One - Review of The Science of Sleep in the style of Empire magazine "Sometimes it's better to have less money [for budget] and more freedom." says director of the much-awaited The Science of Sleep, Michel Gondry. With this film being a third of the cost of his first feature film, Eternal Sunshine of the Spotless Mind, Gondry clearly had a lot of freedom whilst making it. Crossing the genres of comedy, fantasy and romance, Michel Gondry has further broken away from his vast catalogue of music videos to continue creating exciting and entertaining feature films. Set in the bizarre world of St�phane Miroux (Gael Garcia Bernal), The Science of Sleep focuses on the ideas of dreams and reality, as St�phane has seemingly blurred these two conceptions his whole life. ...read more.

In terms of character development, the only character whose back story is mentioned throughout is St�phane, as his mother is also featured. She knows her son has always had trouble distinguishing dreams from reality, and is seen discussing this with her boyfriend. St�phanie mentions her landlord negatively, before she knows St�phane actually lives there and is actually her son. This is because St�phane panics upon first meeting St�phane and Zo�, unintentionally lies about why he is in the house, and pretends he does not live next door for the majority of the film. This shows a spontaneous character who often makes mistakes by following impulsive thoughts, as sometimes he thinks he's in a dream so there will be no consequences. ...read more.

This film is essential viewing for fans of Gondry's quirky cardboard fantasy worlds, as well as fans of obscure and disjointed post-modern narratives. There are classic scenes of St�phane bathing in a tub of blue cellophane; St�phane and St�phanie riding on a full-size version of St�phanie's toy horse; and St�phane hosting his own TV show with cardboard video cameras. Certain parts of the film are a little too tangled and ambiguous, seeming that Gondry may be the only person who actually wholly understands the plotline. Despite this, the majority of his inner thoughts seem to have transferred brilliantly onto celluloid, making the overall film fantastically charming and whimsical. It is clear that Michel Gondry was not trying to create a mainstream blockbuster, or even a film that could be produced cheaply and make a profit, rather he just had a great idea he felt the world just had to see. ...read more.