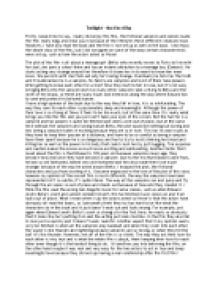 Film studies, what I thought of &quot;Twilight&quot;

﻿Twilight ? the first film Firstly I would like to say, I really did enjoy this film, the fictional vampires and wolves made the film really edgy and drew you in because of the lifestyles these different creatures have. However, I have also read the book and the film is not set up as well as the book. I did enjoy the whole story of the film, but I did not agree on some of the ways certain characteristics were set up, such as how the actors acted so literal. The plot of the film is all about a teenage girl (Bella) who recently moves to Forks to live with her dad, she joins a school there and has an instant attraction to a teenage boy (Edward). He starts acting very strange around her therefore it draws her in to want to know him even more. She persists until she finds out why he?s being strange. ...read more.

same time without the vampires and saving human Bella, the plot would be nothing but boring and him being a vampire makes it exciting because they are so in love. This has its own issues as they have to keep their passion at a distance, and have to be so careful as being a vampire tears them apart because he is so dangerous and has to try to resist drinking her blood and killing her as well as the power in his body that could crush her by just hugging. The suspense and caution makes the movie so much more exciting and exhilarating. Another factor that I loved about the film is that Edward is 109 years old because vampires never age; they become immortal once they have become a vampire. Due to the era that Edward came from, he was so old fashioned, talked very old fashioned and this also made their love much stronger because of the way he acted around Bella. ...read more.

For example, yet again when Edward smells Bella’s scent so strongly for the first time, he reacts so obviously that it looks like he’s putting it on and the acting just looks terrible. In the film they also fall in love just so quickly and it doesn’t seem realistic. Another aspect that in my opinion seems very far-fetched is when all the vampires play baseball and when they crash into each other the sound is like thunder and lightning because vampires are so strong, or when they hit the ball it’s like thunder. However, not all of the film is so cliché. The way they act their love for each other is very true and is what the whole film is about, them keeping their love for each other even though it is the hardest thing to do. It transfixes you into believing the film; on the other hand maybe it was real and very easy for the two actors to act in true and deep meaningful love because they did end up having a real relationship after the first film! ...read more.