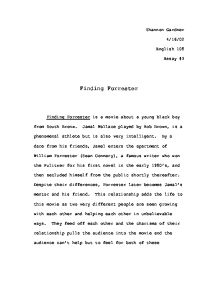 Shannon Gardner 4/16/02 English 105 Essay #3 Finding Forrester Finding Forrester is a movie about a young black boy from South Bronx. Jamal Wallace played by Rob Brown, is a phenomenal athlete but is also very intelligent. By a dare from his friends, Jamal enters the apartment of William Forrester (Sean Connery), a famous writer who won the Pulitzer for his first novel in the early 1950's, and then secluded himself from the public shortly thereafter. Despite their differences, Forrester later becomes Jamal's mentor and his friend. This relationship adds the life to this movie as two very different people are seen growing with each other and helping each other in unbelievable ways. They feed off each other and the charisma of their relationship pulls the audience into the movie and the audience can't help but to feel for both of these characters. ...read more.

Talent scouts circle him like sharks to help maintain their status in the National Basketball League, while his teacher accuses him of plagiarism. His teacher, along with the rest of his school, cannot believe that a black star basketball player could possess such a talent. Even before the case arose, Jamal's teacher was suspicious. There is a scene where he is discussing his suspicions with other faculty. He says that there must be something wrong. He doesn't believe that Jamal could write the way he does. He asks Jamal to write his next paper in front of him in his office. Back at home, Jamal's lower class black friends are suspicious of anyone who studies too hard, and his new white colleagues wonder if he could study hard enough. When Jamal returns home for a visit, his old friends are hesitant. They are more reserved and treat him almost as if he abandoned them. ...read more.

His coach asked him not to fight the case. This shows that he believes Jamal is guilty. Anybody that had faith in Jamal would been behind in to the fullest and encouraged him with his case. Jamal was so offended that he purposely lost the championship game. Maybe if he weren't a star, his academics would mean a little more. This is a wonderful touch to the movie. It helped to emphasize the importance of academics to Jamal. It takes a person with strong character to turn down the spotlight as it is basically placed in their hands. He purposely misses a winning shot to take the focus off his basketball skills and place attention to where it is needed the most. Combining youth, urban, and academic culture, this movie accurately portrays the struggles of athletes to be anything but athletes. Jamal, a black athlete, struggles, as a sixteen-year-old boy on the underside of race and class divides, to find a voice and recognize a talent. ...read more.