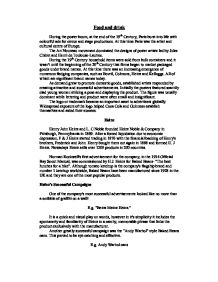 Food and drink During the poster boom, at the end of the 19th Century, Paris burst into life with colourful ads for circus and stage productions. At this time Paris was the artist and cultural centre of Europe. The Art Nouveau movement dominated the designs of poster artists led by Jules Ch�ret and Henri de Toulouse-Lautrec. During the 19th Century household items were sold from bulk containers and it wasn't until the beginning of the 20th Century that firms began to market packaged goods under brand names. At this time there was an increasing emergence of numerous fledging companies, such as Bovril, Colmons, Heinz and Kelloggs. All of which are significant brand names today. As demand grew to promote domestic goods, established artists responded by creating attractive and successful advertisements. Initially the posters featured scantily clad young women striking a pose and displaying the product. The figure was usually dominant while lettering and product were often small and insignificant. ...read more.

The company has done this by introducing new products and altering the tone of its advertising. Heinz has built its own character and personality with traits such as quality and comfort. It's successful advertising remains true to this personality, then creates something memorable within it. Kit Kat "Kit Kat" was first produced in 1935 under the name "Rowntree's Chocolate Crisp," and it was renamed "Kit Kat" in 1935. It's innovative and distinctive red and white wrapping has remained little ever since. The long running pun, "Have a break, have a Kit Kat" was founded in 1957 in the product's television debut. The word "break" is especially suited due to the snappable nature of the biscuit, as well as carrying implications of a well-earned break from whatever you are doing! The company retained the essence of the slogan throughout the years. They presented it in a variety of different ways, maintaining its continuity. ...read more.

In short anything he could use to promote the product, he did! By 1895 he had turned Coca-Cola into natural beverage, drunk in every state and territory in the USA. The logo decorated 2.5 million feet of building facades. Sometimes the logo was simply accompanied by the word "drink." You couldn't get a more direct marketing campaign than that! The Coca-Cola company was quick to realise the value of celebrity endorsement and opera diva Lillion Nordica was one of the first celebrities to appear in the campaign. She was followed by many other major film and pop stars. In 1916 Coca-Cola established their distinctively contoured "hobble skirt" bottle which became one of Coca Cola's trademark and contributed to the success of their already flourishing campaign. In 1925 the first 4-colour billboard advertisement appeared, featuring a uniformed "Ritz Bay" carrying a tray of frosted Coke, with the headline "5,000,000 drinks a day." Between 1928 and 1935, the American artist Norman Rockwell created 6 scenes for Coca Cola in this characteristic "everyday life" style. ...read more.