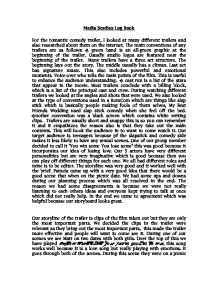 For the romantic comedy trailer, I looked at many different trailers and also researched about them on the internet. The main conventions of any trailers are as follows

Media Studies Log Book For the romantic comedy trailer, I looked at many different trailers and also researched about them on the internet. The main conventions of any trailers are as follows: A green band is an all-green graphic at the beginning of the trailer. Usually studio logos are featured near the beginning of the trailer. Many trailers have a three act structure. The beginning lays out the story. The middle usually has a climax. Last act has signature music. This also includes powerful and emotional moments. Voice-over who tells the main points of the film. This is useful to enhance the audience understanding. A cast run is a list of the stars that appear in the movie. Most trailers conclude with a billing block, which is a list of the principal cast and crew. During watching different trailers we looked at the angles and shots that were used. We also looked at the type of conventions used in a RomCom which are things like slap stick which is basically people making fools of them selves, My Best Friends Wedding used slap stick comedy when she feel off the bed. ...read more.

The reason we had some disagreements is because we were not really listening to each others ideas and everyone kept trying to talk at once which did not really help. In the end we came to agreement which was helpful because our storyboard looks great. Our storyline of the trailer is clips of the film taken out but they are only the most important parts. We decided the clips in the trailer were relevant as they bring out the most important parts, this made the trailer more effective and people will want to come see it. During one of our scenes we see Matt on two dates with both girls. Over the top of this we have played Engbert Humbledink Your just to good to be true, this song works well because it is a love song but really playing with emotions. It goes through both of the scenes. During this scene they were on a picnic which shows a love action going on. In another scene we have a split screen on both of our actresses saying MATT at the same time. ...read more.

I learnt a lot from using the software we got given because it was quiet straight forward. There are parts that don't work like the first clip in our trailer of the door opening. This is because you can see the handle and then it goes straight up to the door which is particular quiet strange. I did a majority of the editing and also I brought in some props. At the beginning I did give across some ideas which were accounted for. So overall I think our production works quiet well but in places we could approve. We could have improved with in our team working skills. If we came to agreements earlier we could have got more done and made it to perfection. Once a member of our group dropped the subject we got to work quicker. Next time I know not to rely on other member within the group and their friends who say the will help and in the end cannot. Also we had to cut two scenes out which were not that important. We has such a short and tight schedual. Therefore, with the time limit we had it came out quiet well. ...read more.