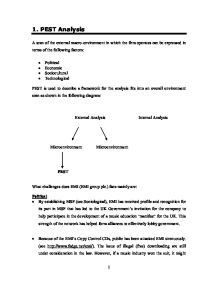 For this piece of coursework, I am going to describe the different systems used in a supermarket like Tesco and A bank.

1. PEST Analysis A scan of the external macro-environment in which the firm operates can be expressed in terms of the following factors: * Political * Economic * Sociocultural * Technological PEST is used to describe a framework for the analysis fits into an overall environment scan as shown in the following diagram: External Analysis Internal Analysis Microenvironment Microenvironment PEST What challenges does EMI (EMI group plc.) face mainly are: Political * By establishing MSF (see Sociological), EMI has received profile and recognition for its part in MSF that has led to the UK Government's invitation for the company to help participate in the development of a music education 'manifest' for the UK. This strength of the network has helped form alliances to effectively lobby government. * Because of the EMI's Copy Control CDs, public has been attacked EMI strenuously. (see http://www.fedge.net/emi/). The issue of illegal (free) downloading are still under consideration in the law. However, if a music industry won the suit, it might effect to sales for EMI because of such demonstrations even if EMI gained copy right as a privilege. ...read more.

Besides, the music sector has been plagued by Internet piracy. Then EMD (EMI Music Distribution) together with SAS institute consulting service implemented a new business intelligence strategy with a solution called SIS (Sales Information System). With OLAP technology, EMD can now use SIS to find its most profitable customers and calculate their lifetime value, determine the best candidates for cross-selling opportunities, and decide whom to target as new prospects. Mike Hillerman, Director of projects and relationship management say that he sees definitely SIS as a competitive advantage for EMI, and he also says: 'I don't know if our competitors have a similar application like this, but if they don't, they just aren't going to be able to maximize their position and their product as well as we can.' * This year saw a dramatic increase in the digital products. EMI have launched digital music distribution since 2000 and has been working with Encoding.com, and Liquid Audio to encode and catalog its collection. Supertracks' system, which uses tools by online software provider Preview Systems. ...read more.

2. Financial ratio analysis According to Roger Faxton, Chief financial officer, Group turn over fell by �54.7m, including a decrease of �23.9m from exchange on translation. This can be calculated that it declined to �851.0 million. It can be considered that is due to their recorded music sales despite the 1.1% of increase of EMI Music Publishing in turnover, and impact of exchange rate during the period. Nevertheless, it can be seen that Return on sales improved to 9.4% from 8.3% in the prior year, 1.1% to 9.4% at a Group level. In April 2004, EMI Group PLC announced it was cutting 1,500 jobs, or 20% of its work force, and dropping weak acts from its roster. However, it is expected that EMI will take the opportunity as Peer Impact is currently conducting internal tests and plans to launch to the public in the first quarter of 2005. Also, as a recent announced decision, EMI outsource the manufacture of their products in Europe and the United States. This could be a great opportunity and will increase their flexibility of business. 3. Appendix Table 1 www.emigroup.com (2004) Table 2 www.emigroup.com (2004) 4. ...read more.