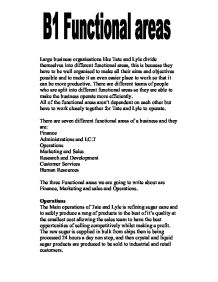 Finance The finance department is where all workers wages/salery get sorted out and to decide what the company's money is going to be spent on which part of the business and how much will be spent and they could even put money into other businesses for a good reputation. Marketing and sales Tate and Lyles don't sell their product to customers who walk into a shop, they sell them to industries that then sell them to customers, but not all industries sell them, some buy them from Tate and Lyle to use in their own products. Tate and Lyle have to carry on with old products as well as introducing new ones for customer satisfactory. ...read more.

To do this they would have to go on the street to ask customers to fill in surveys or questionnaires, or another way to do this they would have to get information from another place such as the Internet. Promotion is advertising, keeping customers aware of products and trying to persuade potential customers to try their product. To make these advertisements they had to send contracts to advertising agencies to design an ad campaign. About two years ago Tate and Lyle had a campaign were the chef Gary Rhodes was using Tate and Lyle products in a cooking advertisement. Other ways of promoting products is on billboards, posters, magazines and the Internet. Sales is making sure products are being sold. Tate and Lyle have got a sales team where they work with customers and make sure they are happy with what they have bought. ...read more.