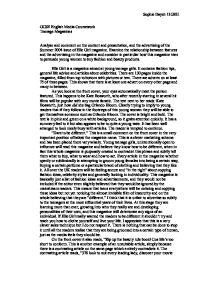 GCSE English Media Coursework Teenage Magazines Analyse and comment on the content and presentation, and the advertising of the Summer 2004 issue of Elle Girl magazine. Examine the relationship between features and the advertising in the magazine and consider in particular how this magazine tries to persuade young women to buy fashion and beauty products. Elle Girl is a magazine aimed at young teenage girls. It contains fashion tips, general life advice and articles about celebrities. There are 130 pages inside the magazine, filled from top to bottom with pictures or text. There are adverts on at least 75 of these pages. This shows that there is at least one advert on every other page and many in between. As you look at the front cover, your eyes automatically meet the person featured. This happens to be Kate Bosworth, who after recently starring in several hit films will be popular with any movie fanatic. The text next to her reads: Kate Bosworth, just how did she bag Orlando Bloom. Clearly trying to imply to young readers that if they follow in the footsteps of this young woman they will be able to get themselves someone such as Orlando Bloom. ...read more.

there is an advert spread across the entire page. It is titled "The Real Bling" against a dark background a watch is photographed. It is covered in shining diamonds, with a silver face. This is following the huge trend that has approached the UK from the American hip-hop industry. As people become more and more interested in this line of music they will become more and more keen to dress 'the part'. It is a very popular type of music with all youth at the present so I feel that this is a wise advert to have so close to the beginning. Fake diamonds have become a big trend recently and they are everywhere as decoration on jewellery, clothes and shoes. There is also an advertisement called "Girls on Film," on page 59 Which entails looking at famous film stars and copying their style, (another contradiction to "Dare to be Different.") The first film star chosen is Olivia Newton John when she co-starred in "Grease". The article gives many examples of different accessories and items of clothing to suit the genre of the film whilst staying up to date with the present fashion. The layout is quite attractive, it appears to be quite simple, and not trying to hard which is refreshing for the reader. ...read more.

The language used is casual, colloquial and often slang. This is how we speak to our friends and by developing this casual, friendship tone, people will listen more and absorb the adverts, maybe eventually go out and buy the products. The tone is another cleverly designed subtle advert for itself. On page 17 Joan Collins is featured. The text tells the reader that she is glamorous and wonderful. Throughout the article we learn how to capture her daytime look as well as her evening look. From handbags to jewellery, to hats and trousers, we learn exactly how to copy her style. It is somewhat ironic that the last line of the article is: "In the words of the lady herself "Know who you are-don't be a clone!"" Yet another contradiction, it tells you to be and dress like Joan Collins but yet she basically is quoted saying, "have your own style!" This magazine is cleverly made but highly unfair. Preaching about having your own style and then subliminally forcing young females to dress and be and act and talk a certain way. If Elle Girl truly does want people to "Dare to be different," then it needs to start with the team who created it. Sophie Daysh 11GEH ...read more.