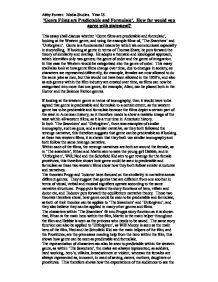 'Genre Films are Predictable and Formulaic'. How far would you agree with statement?

'Genre Films are Predictable and Formulaic'. How far would you agree with statement? This essay shall discuss whether 'Genre films are predictable and formulaic', looking at the Western genre, and using the example films of, 'The Searchers' and 'Unforgiven'. Genre is a fundamental means by which we communicate especially in storytelling. If looking at genre in terms of Thomas Shatz, he puts forward the theory of similarity and overlap. He adopts a thematic and ideological approach, which identifies only two genres; the genre of order and the genre of integration. In this case the Western would be categorised into the genre of order. This essay shall also look at how genre films change over time, due to changes in society, as characters are represented differently, for example, females are now allowed to do the same jobs as men, but this would not have been allowed in the 1950's, and also as sub genres within the film industry are created over time, as films can now be categorised into more that one genre, for example, Alien, can be placed both in the Horror and the Science Fiction genres. If looking at the western genre in terms of iconography, then it would have to be agreed that genre is predictable and formulaic to a certain extent, as the western genre has to be predictable and formulaic because the films depict a certain part of the west in American history, so ...read more.

This therefore suggests that as the time period of these two films move from the 1950's to the 1990's, the way that the western films portray their characters is changed, through changes in expectations and society, this therefore suggests that as genres change over time, it can not be predictable and formulaic. The mise-en-scene, within the western genre, is always seen to be desert, raw, harsh, cliffs, basic and hot, this would be predictable if both films fulfilled this, but they do not. 'The Searchers' is shown to be very harsh, raw and a desert how it would be expected, but 'Unforgiven', shows the west in a very different light, it is green, lush, mountains and has a mixture of weather, this therefore suggests that the director of the film Clint Eastwood, has gone against the expectations of the audience as it is filmed in the 1990's, he takes a different approach to showing the west as beautiful. This once again relates to changes in society over time, and therefore suggests that genre is in fact not predictable and formulaic, in terms of the mise-en-scene of the western genre. When looking at the mise-en-scene and characters, it is important to look at the filming techniques used by the directors. 'The Searchers', was filmed and directed by John Ford, and starred John Wayne, this film was the twelfth time in which they had worked together on a western, and therefore suggests that their western film, could be easily depicted through the uses of filming. ...read more.

flavour, did not break with the spirit of the true western a class which Bazin termed 'novelistic', and characterized by their lyricism and their sincere rather than patronising approach to the form.' This therefore suggests that during the 50's directors such as John Ford created film, which all seemed to follow the same codes and conventions of the western genre therefore making them all predictable and formulaic. Both these critics therefore suggest that the western genre films created around the golden age of the 1950's are in fact predictable and formulaic, as they are all based on the similar structure of the 'Dime novels', which creates the codes and conventions in which they follow. In conclusion to the essay, it could be agreed to a certain extent, that, "Genre films are predictable and formulaic", because as shown in the two western films discussed, 'The Searchers' and, 'Unforgiven', although both created in two different time periods, they both follow the theories of Propp and Todorov. This is shown by 'The Searchers', fulfilling Propps theory of hero, villain and helper etc, but also following Todorovs equilibrium theory. These two theories are also followed within 'Unforgiven', which therefore suggests the western genre is predictable and formulaic. It can be suggested if looking at the iconography of the western film, that it has to be predictable in terms of iconography, because the films depict a certain part of the western and American history. ...read more.