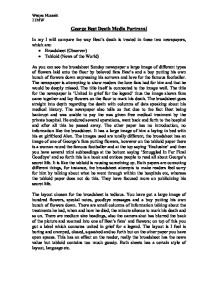 George Best Death Media Portrayal In my I will compare the way Best's death is treated in these two newspapers, which are: * Broadsheet (Observer) * Tabloid (News of the World) As you can see the broadsheet Sunday newspaper a large image of different types of flowers laid onto the floor by beloved fans Best's and a boy putting his own bunch of flowers down expressing his sorrows and love for the famous footballer. The newspaper is attempting to show readers the love fans had for him and that he would be deeply missed. The title itself is connected to the image well. The title for the newspaper is 'United in grief for the legend' thus the image shows fans came together and lay flowers on the floor to mark his death. The broadsheet goes straight into depth regarding the death with columns of data speaking about his medical history. The newspaper also tells us that due to the fact Best being bankrupt and was unable to pay the was given free medical treatment by the private hospital. ...read more.

There are small columns of information talking about the treatments he had, when and how he died, the minute silence to mark his death and so on. There are medium size headings, also the camera shot has blurred the back of the picture and zoomed into one of Best's fans' and flowers; on top of this you got a label which connotes united in grief for a legend. The layout is I feel is boring and cramped, closed, squashed and so forth but on the other paper you have open spaces. This has an effect on the reader, really the broadsheet has the news value but tabloid contains too much gossip. Both sheets has a certain style of layout, language etc. For the tabloid, you have a zoomed image of the footballer and his ex who is holding his neck and the background is blurred in the picture. On the bottom of the paper are mini subheadings revealing other aspects of the footballer's life as it wishes to encourage people to purchase and read all about his secret life. ...read more.

The reasons as to why he is being represented in this particular way is due to the target audience. Tabloid newspapers are mostly read by working class people. Also the newspaper aims to inform its readers everything abut his life be it shocking news, like the mini subheading in the front paper 'Agony over his secret daughter'. The broadsheet gives the facts. It as news values and concentrates on his medial experiences rather than his secret life. It wishes to inform fans what he had to endure with hospitals and how he was still being treated free of charge. It explains about what his fans did for him and how much he will be missed and the image is there to show just how much fans appreciated him. The reason as to why it is different to the tabloid paper is that broadsheets are mostly targeted for middle class people and it does not want to contain information which isn't entirely accurate. In the tabloid paper you can find all the gossip of his life but when you look it has less news value than the broadsheet. ?? ?? ?? ?? Waqas Hussain 11MW ...read more.