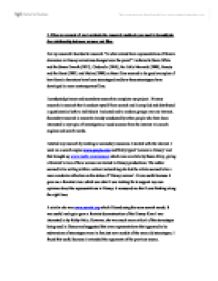 Give an account of, and evaluate the research methods you used to investigate the relationship between women and film.

1. Give an account of, and evaluate the research methods you used to investigate the relationship between women and film. For my research I decided to research 'To what extend have representations of female characters in Disney animations changed over the years?' I referred to Snow White and the Seven Dwarfs (1937), Cinderella (1950), the Little Mermaid (1989), Beauty and the Beast (1991) and Mulan (1998) as these films seemed to be good examples of how female characters have been stereotyped and how these stereotypes have developed in more contemporary films. I conducted primary and secondary research to complete my project. Primary research is research that I conduct myself from scratch and I compiled and distributed a questionnaire both to individuals I selected and to random groups over our intranet. Secondary research is research already conducted by other people who have been interested in my topic of investigation; I used sources from the internet via search engines and search words. I started my research by looking at secondary resources. I started with the internet. I went on a search engine www.google.com and firstly typed 'women in Disney' and that brought up www.media-awareness.ca which was an article by Susan Riley, giving a feminist's view of how women are treated in Disney productions. The author seemed to be writing within a cultural networking site but the article seemed to be a more academic reflection on the status of 'Disney women'. ...read more.

they agrees that women's roles as domestic housewife's was wrong, and women should be given more independent roles. The internet was also very helpful in allowing me to get information on my chosen Disney films. www.wikipedia.com allowed me to find the dates of the production and the details on the plot, characters ect. This was a change because all the information form that site was factual and all of the information I had received until this point was opinion based. From the site I was also able to find the original cast member and so on, this wasn't so much relevant to my topic however it allowed me to get a better insight in the Disney films and the narrative behind it. Overall the internet was very useful in allowing me to extract information and use it in my work, the fact that the internet is a massive resource and contains so much information, it needs to be used correctly with correct key terms otherwise you might get miss lead. The other type of secondary data I used was videos. I watched all of the Disney films that I had chosen to talk about, Snow White and the Seven Dwarfs, Cinderella, the Little Mermaid, Beauty and the Beast and Mulan. The films were helpful as well as I watched them in order that they were released and started to see differences in the message that they give out to younger audience. ...read more.

That's when I decided I needed to change the whole questionnaire and my target audience so I made the questions directly linked with my work, I also made the target audience different subject teachers, and the replies I got were more helpful. Mr Collins, (Drama teacher, age group 31-40) answered 'how do you feel characters in Disney animations should be represented?' "women should be represented as articulate, strong with drive and ambition", the response was very surprising to me because of the fact that he was a man and I expected men not to care about women feelings. Mrs Melena (Geography teacher, age group 21-30), answered the same question "just as they are. I wouldn't mind a couple more ethnic differences and cultures", Which I defiantly agree with because it supported what I believed. I also emailed Professor Dona Iodanova to ask her about "how women are represented in Disney films and the message they perceive?" in hope of a more factual answer from someone that was in the media business, she replied back the next day explaining how she didn't study American cinema and I was better of contacting someone that does, I replied back asking her how women in general are represented in films, she never replied. Overall, all the sources were helpful in there own way and the ones that were not so helpful, helped me change the way I conducted the research and allowed me to see where I went wrong. ...read more.