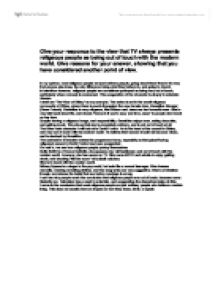 Give your responce to the view that TV always presents religious people as being out of touch with the modern world. Give reasons for your answer, showing that you have considered another point of view.

Give your responce to the view that TV always presents religeous people as being out of touch with the modern world. Give reasons for your answer, showing that you have considered another point of view. In my opinion, most religeous people are just ordinary people, going about there lives in the way that anyone else does, the only difference being what they believe in, and going to church. In television however, religeous people are sometimes portrayed as being very out of touch, particularly where comedy is concerned. ...read more.

Despite having a religeous image, and responsibility, Geraldine enjoys men, eating chocolate, and getting drunk. This shows that she is completely ordinary, and is not out of touch at all. The other main character I will look at is David Horton. He is the head of the council in Dibley, and very out of touch with the modern world. He belives that women should not become vicars, and is shocked by Geraldine. The contrast in characters makes the programme funny, especially as the typical 'boring religeous' person in David Horton has been exagerated. ...read more.

She is in touch with the modern world. Britney Spears is a singer in the pop world, but acts like a normal teenager. She dresses normally, wearing revealing clothes, and her song lyrics are very suggestive. She is a Christian though, and shares the belief that s*x before marriage is wrong. I can see why people reach the conclusion that religeous people are out of touch, because some blatently are. Television has a need to entertain, and exagerating the characters helps do this. I come to the conclusion that most religeous people are just ordinary people who believe a certain thing. This does not usually have an impact on how they dress, drink, or speak. ...read more.