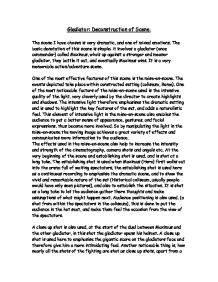 Gladiator: Deconstruction of Scene. The scene I have chosen is very dramatic, and one of mixed emotions. The basic denotation of this scene is simple: it involves a gladiator (once commander) called Maximus, who's up against a stronger and meaner gladiator, they battle it out, and eventually Maximus wins. It is a very memorable action/adventure scene. One of the most effective features of this scene is the mise-en-scene. The events depicted take place within constructed setting (coliseum, Rome). One of the most noticeable factors of the mise-en-scene used is the intensive quality of the light, very cleverly used by the director to create highlights and shadows. The intensive light therefore emphasises the dramatic setting and is used to highlight the key features of the set, and adds a naturalistic feel. This element of intensive light in the mise-en-scene also enables the audience to get a better sense of appearance, gestures, and facial expressions, thus become more involved. So by manipulating the light in the mise-en-scene the moving image achieves a great variety of effects and communicates more information to the audience. ...read more.

It is shot from within the pit and is looking up at the coliseum at a high angle. This emphasises the amount of danger involved, and how easily the fighters can fall prey to the lion, how easily accessible they are. There are many close up shots off the lion used as well to provoke fear into the audiences minds. An extreme close up shot is also used of Maximus's face when the lion is on top of him; this has been done to emphasis his facial expressions and therefore get the audience emotionally involved. There has also been a constant use of aerial shots, and long shots to re-establish the situation. Long shots have also been used, one interesting use of the long shot was when the lions were released from the pit, and from the long shot the background dominates although the figures are prominent, this is very effective as it shows the lions in the background, the blood thirsty spectators, and the masked gladiator along with Maximus; this has been done to emphasise the complexity and difficulty of the task in hand as the background dominates, it keeps the audience on the edge of there seats. ...read more.

and sympathetic sound has been used, this has been done to add emotion to the scene through music, it carries meaning, as we suddenly start to associate the passionate music to Maximus as it makes us feel sorry for him, and feel for him and his family. Special effects (CGI) have been used very obviously in this scene, noticeably the lions, however we cannot tell initially. The lions have been used as CGI because it evidently would be to dangerous, stupidity and you wouldn't be able to tell the lions what to do. It would mean risking life! This is the main reason for CGI being used. Without the lions the situation would have been far more predictable as it would have only been Maximus up against the other Gladiator, but adding the special effects (lions) offers an extra edge and a risk factor to the scene. So the CGI has been very cleverly used. All these factors have contributed to this scene being very successful, and have made this scene very effective. So in conclusion the scene is very effective in disorientating and distorting the audience, it does this extremely well through the use of cinematography and special effects. ...read more.