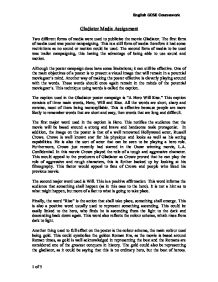 Gladiator Media Assignment Two different forms of media were used to publicize the movie Gladiator. The first form of media used was poster campaigning. This is a still form of media therefore it had some restrictions as no sound or motion could be used. The second form of media to be used was trailer campaigning, this having the advantage of being able to use sound and motion. Although the poster campaign does have some limitations; it can still be effective. One of the main objectives of a poster is to present a visual image that will remain in a potential moviegoer's mind. Another way of making the poster effective is cleverly playing around with the words. These words should once again remain in the minds of the potential moviegoer's. This technique using words is called the caption. The caption used in the Gladiator poster campaign is "A Hero Will Rise." This caption consists of three main words, Hero, Will and Rise. All the words are short, sharp and concise, most of them being monosyllabic. This is effective because people are more likely to remember words that are short and easy, then words that are long and difficult. The first major word used in the caption is Hero. This notifies the audience that the movie will be based around a strong and brave and handsome male protagonist. In addition, the image on the poster is that of a well renowned Hollywood actor, Russell Crowe. Crowe is well known star for his physique and looks as well as his acting capabilities. ...read more.

on the age range in this particular poster as they want to attract as many people as possible before the film is given an official rating. Another reason could be that the poster is to be used worldwide and as many countries have different rating systems it would be inappropriate to put an age range. The additional information at the end of the poster consists of the official web address as well as the film makers. The two major production companies in the film industry are mentioned, DreamWorks and Universal Pictures. Hearing these names alone would tempt anyone to watch the movie, as they are well known for being big budget companies. This would enable that movies made by these multi billion dollar production companies have all the necessary resources to become box office hits. Also even before the release date the movie would not be expected to be some low budget movie flop but entertaining, which would attract early interest from some potential Also the web page would help build further interest in the movie as well as include vital information like the release date (which is not on the posters) and trailers to give a taste of the movie. This could also contain a fan site for fanatics to discuss about the forthcoming movie. Working alongside the poster campaign is the Gladiator trailer. Trailers normally consist of a series of selected shots from the film being advertised. They are advertisements consisting of short scenes from a motion picture that will appear in the near future. ...read more.

Also the trailer interacts more with the audience as it has movement and sound, these being the decisive factors. Furthermore, the trailer shows glimpses of the movie, characters as well as the storyline. This would more likely encourage moviegoer's then a still image that needs a lot of thinking behind it. In the trailer the thinking is narrowed down for you and you don't have to do as much guesswork as on the poster. The story is more or less given to you. Also the trailer not only shows the storyline but also shows actual footage of the movie so the audience can also view the picture and get a taste of the movie. On the other hand, the poster is seen more often and can be placed in more locations then a trailer. I say this because everywhere you see, from buses to building walls; they are all mainly plastered with posters to advertise something or another. I also thought that the clever play of words and brilliant use of imagery, in both the trailer and poster, really made the movie appealing to the general public (even people who don't normally watch movies of the action, adventure or historical genre). My personal opinion is that both the poster and the trailer work extremely well together, are effective and purposeful towards their objective, to sell the movie Gladiator. The poster caught the general public's attention and the trailer further informed potential audience who were attracted by the posters. I believe these two publicity systems worked exemplary together to make the general public not only interested in the movie, but to actually make them be prepared to pay up to watch the movie in the cinemas. ?? ?? ?? ?? English GCSE Coursework 1 of 5 ...read more.