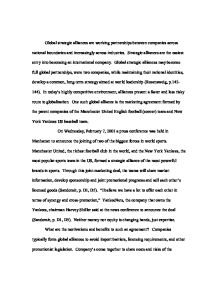 Global strategic alliances are working partnerships between companies across national boundaries and increasingly across industries.

Global strategic alliances are working partnerships between companies across national boundaries and increasingly across industries. Strategic alliances are the easiest entry into becoming an international company. Global strategic alliances may become full global partnerships, were two companies, while maintaining their national identities, develop a common, long-term strategy aimed at world leadership (Rosensweig, p.142-144). In today's highly competitive environment, alliances present a faster and less risky route to globalization. One such global alliance is the marketing agreement formed by the parent companies of the Manchester United English football (soccer) team and New York Yankees US baseball team. On Wednesday, February 7, 2001 a press conference was held in Manhattan to announce the joining of two of the biggest forces in world sports. Manchester United, the richest football club in the world, and the New York Yankees, the most popular sports team in the US, formed a strategic alliance of the most powerful brands in sports. Through this joint-marketing deal, the teams will share market information, develop sponsorship and joint promotional programs and sell each other's licensed goods (Sandomir, p. D1, D5). "I believe we have a lot to offer each other in terms of synergy and cross-promotion," YankeeNets, the company that owns the Yankees, chairman Harvey Shiller said at the news conference to announce the deal (Sandomir, p. D1, D5). Neither money nor equity is changing hands, just expertise. ...read more.

(Grant, p. A2, A7) It appears that Manchester United has the most to gain from the alliance, primarily access to the richest market in the world, the US. The Yankees have won four of the last five World Series Championships, and United hopes to capitalize on the Yankees glory to gain a foothold in the vast American market, where soccer is growing in popularity at school level but remains relatively untapped commercially. ''Their executive staff knows North American markets better than anyone. Soccer has developed dramatically in the US over the last 10 years and we believe there is a market for Manchester United among football fans of all ages," says Kenyon (Sandomir, p. D1, D5). In the United States football remains primarily of interest to young women and Latin Americans, the latter forming the biggest minority population in New York City, the prime viewing area of the YES network, where Manchester United games are televised. While there appears to be very little interest in American baseball in the UK, there is still much to be gained by the Yankees from this alliance. The soccer team also owns its own television network, MUTV, which can begin to show Yankee games after working out an agreement with Major League Baseball front offices. This will help to lead to increased interest in the American game. And though baseball can never hope to reach the popularity of football in England, just being connected to the Manchester United brand will spark curiosity in the fans. ...read more.

117-121). While each firm wants a global dominance in the sport arena, Manchester United's market is football while the Yankees market is baseball. This distinction will reduce direct competition while their common goals will help to produce effective and efficient collaboration. Is the alliance of Manchester United and the Yankees a successful one? It is probably much too early to tell. Manchester United, a publicly held company, saw it's stock price increase 13 percent to $1.65 the day the deal was announced (Hoebom, A2, A6). Today the stock price is $2.40. It is difficult to say to what degree, if any, this alliance has on the increased stock price, but obviously, this immediate increase was due to the incredible excitement in England the day the deal was announced. While today the agreement appears to be little more than an opportunity for each side to get its foot in the door in terms of international business, both sides hold out hope for greater things. Effective global alliances are usually very slow in the making but can be among the best mechanisms to implement strategies in global markets (Bartlett, p. 222). With what each of these organizations have accomplished both on the playing field and in the boardroom, it would be difficult to bet against this global strategic alliance being a great success for both. As Oliver Butler, editor at Soccer Investor said, "People are talking about it as if it's a massive deal. It's not. It's a very small deal between two very big clubs though it could be the beginning of a beautiful friendship." (bbc.co.uk) ...read more.