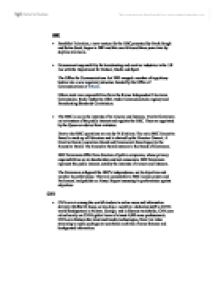 Government responsibility for broadcasting and creative industries in the UK lies with the Department for Culture, Media and Sport.The Office for Communications Act 2003

BBC * Breakfast Television, a new venture for the BBC presented by Frank Bough and Selina Scott, began in 1983 and this was followed three years later by daytime television. * Government responsibility for broadcasting and creative industries in the UK lies with the Department for Culture, Media and Sport. The Office for Communications Act 2003 merged a number of regulatory bodies into a new regulatory structure headed by the Office of Communications or Ofcom. ...read more.

Twelve Governors act as trustees of the public interest and regulate the BBC. They are appointed by the Queen on advice from ministers. Day-to-day BBC operations are run by 16 divisions. The main BBC Executive Board is made up of 9 directors and is chaired by the Director-General. A Creative Board, Journalism Board and Commercial Board report to the Executive Board. ...read more.

They are accountable to BBC licence payers and Parliament, and publish an Annual Report assessing its performance against objectives CNN * CNN.com is among the world's leaders in online news and information delivery. Staffed 24 hours, seven days a week by a dedicated staff in CNN's world headquarters in Atlanta, Georgia, and in bureaus worldwide, CNN.com relies heavily on CNN's global team of almost 4,000 news professionals. CNN.com features the latest multimedia technologies, from live video streaming to audio packages to searchable archives of news features and background information. ...read more.