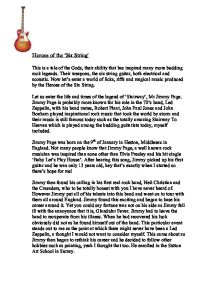 Heroes of the 'Six String' This is a tale of the Gods, their ability that has inspired many more budding rock legends. Their weapons, the six string guitar, both electrical and acoustic. Now let's enter a world of licks, riffs and magical music produced by the Heroes of the Six String. Let us enter the life and times of the legend of 'Stairway', Mr Jimmy Page. Jimmy Page is probably more known for his role in the 70's band, Led Zeppelin, with his band mates, Robert Plant, John Paul Jones and John Bonham played inspirational rock music that took the world by storm and their music is still famous today such as the totally amazing Stairway To Heaven which is played among the budding guitarists today, myself included. Jimmy Page was born on the 9th of January in Heston, Middlesex in England. Not many people know that Jimmy Page, a well known rock musician was inspired than none other than Elvis Presley and his hit single 'Baby Let's Play House'. ...read more.

He decided though not to go straight into a band and began as a session guitarist; he made music with some of the best in music, such as The Kinks and the Rolling Stones. However when 1966 rolled up Jimmy was looking to join a full time band. The Yardbirds were on the look out for a new guitarist since the departing of the equally talented, Eric Clapton. Jimmy accepted this offer to join the band. He began however as a bassist, a fact not many people know about today! He later, of course, became a guitarist. The Yardbirds however were descending from the pedestal if it were band wise, as leader Jeff Beck left the band shortly after the arrival of Jimmy. The band finally ended in 1968 and Jimmy was left with no band again, but Jimmy did not stop there. This was probably the most exciting time in Jimmy Page's life as he started a new band with John Paul Jones on the Bass Guitar, Robert Plant ...read more.

In 1984 Jimmy joined Jeff Beck, Robert Plant and Nile Rogers for the creation of the Honeydippers, I have one of their songs actually and take it from me it was worth it! Yet again however the band called it quits shortly after their album, Mean Business was released. Jimmy Page went on to do a few more concerts, the most famous as his reunifying of Led Zeppelin and Tony Thompson and Phil Collins for a concert. In 1994, Jimmy Page began the last leg of his musical career and joined up with Robert Plant once again. They mostly made acoustic hits and did a MTC Unplugged special with a world tour. Then Led Zeppelin were given a place in the Hall of Fame, about time too. So ends the high life of one of my Guitar Heroes and a well known Hero of the Six String. Biography I would like to acknowledge the following sources as helpful in aiding me To produce a detailed account of Jimmy Page's Musical Life: www.jimmypage.com, The Internet Led Zeppelin, the Anthology, Reading Material/Book Guitar Teacher Total Guitar Magazine, Magazine and Reading Material ...read more.