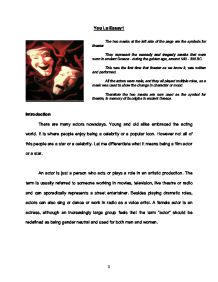 You Lu Essay1 Introduction There are many actors nowadays. Young and old alike embraced the acting world. It is where people enjoy being a celebrity or a popular icon. However not all of this people are a star or a celebrity. Let me differentiate what it means being a film actor or a star. An actor is just a person who acts or plays a role in an artistic production. The term is usually referred to someone working in movies, television, live theatre or radio and can sporadically represents a street entertainer. Besides playing dramatic roles, actors can also sing or dance or work in radio as a voice artist. A female actor is an actress, although an increasingly large group feels that the term "actor" should be redefined as being gender neutral and used for both men and women. A movie star on the other hand, is a celebrity, a famous person, a superstar, a famous and renowned personality well known for his or her starring, or leading roles in motion pictures and at the same time known for his acting performance. History of Movie Actors Taken from the Wikipedia, (Wikipedia, 2004) the first recorded case of an actor performing took place in 534 B.C., probably November 23rd, though the changes and alterations in calendar over the years make it hard to resolve exactly. It is when the Greek performer Thespus stepped on the stage at the Theatre Dionysus and became the first person to speak words as a character in a play. The set-ups of storytelling were immediately revolutionized and transformed. Prior to Thespus' act and performance, stories were told in song and dance and in third person narrative, but no one had assumed the role of a character in a story. In reverence to Thespus, actors are formally referred to as Thespians. Long ago, the term "actor" was restricted and hampered to men. ...read more.

It is impossible to know exactly why any particular actor makes the top bracket in popularity. It may be his personality, his acting, his role, and the amount of exploitation by the studio or any combination of these factors. There is considerable mythology concerning how stars are made, particularly the female ones. Many of the myths are concerned with Cinderella tales of how a beautiful girl is snatched from some humdrum position by a perceptive producer, win a contract, and become a star overnight. In a primitive society, it is difficult to determine the degree of truth in myths and folk tales. It is said that in Hollywood or even in other studios, it is quite possible to find out how stars are actually made, and to contrast this with the mythology. Most everyone concerned with the making of movies is aware that the quickest and surest way to become a star is to be asked to come to Hollywood after being successful on Broadway. This means being an actor of distinction, or at least, of considerable ability. But there are many movie stars who have not come from Broadway, and it is about them that myths circulate. Not all however are successful after coming in Hollywood. The success tales are, of course, not the same for each star. A combined list of the success ingredients in all of them would include photogenic looks, a personality that clicks, sleeping with the right person or persons, publicity, knowing the right people and playing the social game, perseverance, ability, good roles, and breaks. While looks are important, great or classical beauty is not vital and crucial to being a star. Much emphasis is put on being photogenic, but it is impossible to get into a compromise on what this quality is. Opinions range from its being due to the bone structure of the face to the sexiness. ...read more.

They like to see results of their work and to use their strongest abilities. They like to get a feeling of accomplishment from their work. They consider independence important for they like to make decisions and try out ideas on their own. These people prefer jobs where they can plan their work with little supervision. These people consider relationships important for they like to work in a friendly, non-competitive environment. They like to do things for other people. They prefer jobs where they are not pressured to do things that go against their sense of right and wrong. They also consider recognition important and like to work in jobs in which job opportunities for them to advance, and be recognized for their work and direct and instruct others. They usually prefer jobs which they are looked up to by others. These people consider good working conditions important. They like jobs offering steady employment and good pay which fits their individual work style. These people have artistic interests for they like to work activities that deal with artistic forms, designs and patterns. They prefer works which allows self expression. They also have enterprising interests. They like work activities that involve starting up and carrying out projects especially in business and take risks for profit. They also have social interest for they like to work activities that assist others, and promote learning and personal development. They like to communicate with others: to give, teach, give advice, help or otherwise be of service to others. Also being a star takes preparation. One must be trained, must have creative ability, experience and most of all talent. You do not exactly need a formal training to become one. It depends on what you are good at it. But if you feel like training is needed, then why not? We'll never know you might be the next Elizabeth Taylor in the future and gains $1,000,000 from her movie Cleopatra or maybe the next Tom Hanks who is one of the most celebrated actors in the world. ...read more.