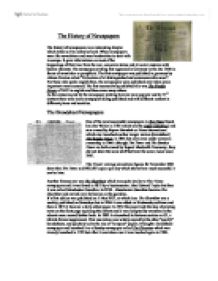 The History of Newspapers The history of newspapers is an interesting chapter which takes us five centuries back. When newspapers were like newsletters and were handwritten to start with in europe. It gave informations on most of the happenings of that time from the war, economic status and all social customs with human interests. The newspaper printing first appeared in Germany in the late 1400 in forms of newslatter or pamphlets. The first newspaper was published in germany by Johann Carolus called "Collection of all distinguished and commemorable news". For those who spoke english then, the newspapers were published only when some important event occurred. The first successively published title was The Weekly Newes of 1622 in english and then came many others. As the centuries past by the newspaper printing became more popular and by 17th century there were more newspapers bieng published and with different content in different places and societies. ...read more.

In 1952 the paper took the step of printing news on the front page replacing the adverts and it was accepted by everyone as the adverts were moved further back. In 1992 it relaunched its features section as G2, a tabloid-format supplement. This innovation was widely copied by the other "quality" broadsheets, and quickely led to the rise of "compact" papers. It bought a broadsheet newspaper and launched it as a Sunday newspaper called The Observer which was already launched in 1791 but after it was taken over it was lauched again in 1993. The Daily Telegraph broadsheet newspaper was introduced in 1855. It also introduced us The Sunday Telegraph paper later in 1961 . The Financial Times was found in 1888 by James Sheridan, it was more about the economy and gave us the financial news or businesses. The Independent is a British compact newspaper found by Tony O'Reilly in 1886. ...read more.

The Mirror was a broadsheet newspaper until the 1950s but is now one of the biggest tabloid newspapers. The People, previously known as the Sunday People, a tabloid newspaper sold only on Sundays. It was lauched in October 1881 and owned by the Trinity Mirror company. 1900- The Daily Express was founded in 1900 by Cyril Arthur Pearson and introduced as a broadsheet newspaper but in 1977 it switched to tabloid formatting. On 29 Dec 1918 it launched the Sunday Express. The Evening Standard is a tabloid newspaper found in May 1827 by Charles Baldwin it is published and also sold only in London. The News Chronicle was launched in 1896 by Lord Northcliffe, the name changed into the Daily Mail. The Daily Mail was introduced as a broadsheet, but switched to a compact format on 3 May 1971. It also published a Sunday newspaper which was The Mail on Sunday launched in 1982. 1964 - The Sun was launched which replaced the Daily Herald and still a tabloid newspaper. Its now the best selling newspaper. ...read more.