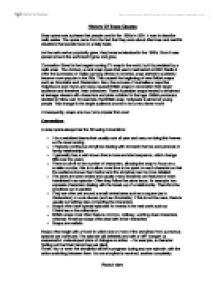 History Of Soap Operas Soap opera was a phrase that people used in the 1930s in USA. It was to describe radio series. The opera came from the fact that they were about dilemmas and real life situations that people have on a daily basis. As the radio series popularity grew, they became televised in the 1950s. Soon it was spread around the world and it grew and grew. Coronation Street is the longest running TV soap in the world, but it is predated by a radio soap, The Archers, a rural soap opera that was broadcasted on BBC Radio 4. After the successes of Dallas (among others) in America, soap started to suddenly became more popular in the '80s. This caused the beginning of new British soaps such as Brookside and Eastenders. Also, the success of Australian soaps like Neighbours and Home and Away caused British soaps to reconsider their target audience and therefore, their characters. These Australian soaps tended to be aimed at teenage viewers with characters and plots suitable for that age. ...read more.

Three, four or even five storylines will be in progress during any one episode, with the action switching between them. As one storyline is resolved, another completely different from the previous one with other characters begins. The characters go from quiet, harmonic (but uninteresting) periods to chaotic, confusing (but interesting) dilemmas. The action simply concentrates solely on the later. Characters There are certain types of characters that can be seen to be common among many soaps: * The Grandmother Figure - A wise old person, usually female. This character helps others with their problems with advice and support. He/She has lots of contact with many of the other characters. * The Strong Woman - An independent, powerful, aggressive woman. She can usually be found at the centre of conflicts. * Jack-The-Lad - A male character that manipulates others to his own ends. Often the stock 'baddie'. This character may become softened over time, and this often leads to him becoming the comic relief of the soap. * Young Couple - A couple that bravely face the difficulties of life, through their own, serious relationship problems. ...read more.

They are deeply community based and usually have a central meeting point (often a pub) where all the characters meet. The Queen Vic from Eastenders and The Rover's Return pubs from Coronation Street. These meeting points are featured in every episode and are often the settings for major events in the history of the soap. Their important position in the soap makes them important tourist places that fans visit from far to visit this meeting point in real life. British soaps deal with real life issues people have such as homosexuality, drugs and underage pregnancies. The Appeal of Soaps Many people watch soaps because it pleases us to see and hear other people's problems, because it distracts us from our own. However, a soap opera has no victims, as the characters, of course, are not real. We like to make guesses about their actions and reactions based on our knowledge of them. We like to see them develop as we get to know them, and we enjoy learning about the relationships between characters. We become experts on our favourite soaps, we like to watch other people's lives, as, in the case of soap operas, they are just like ours, but more interesting. Razaul Islam ...read more.