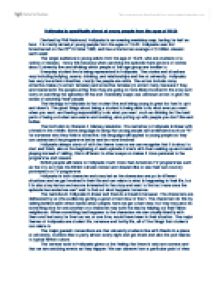 Hollyoaks is specifically aimed at young people from the ages of 16-24 Devised by Phil Redmond, Hollyoaks is an evening weekday soap, lasting for half an hour. It is mostly aimed at young people from the ages of 16-24. Hollyoaks was first broadcasted on the 23rd October 1995, and has attracted an average of 3 million viewers each week. The target audience is young adults from the age of 16-24, who are students of a variety of classes, I know this because when watching the episode there are lots of stories about University live and drinking which people of this age group are familiar to. Everyday student live is being represented in Hollyoaks. The stories and situations vary including bullying, exams, drinking, and relationships and live at university. Hollyoaks has very few ethnic minorities, mostly the people are white. ...read more.

Some language is slang that young people will understand such as "fit" for someone who they think is attractive; this language will appeal to young people so they can understand the programme better and be more involved. Hollyoaks always starts off with the theme tune so we can recognise that it is about to start and finish, also at the beginning of each episode it starts with them waking up and music playing instead of talking, this is different to other soaps so makes it more personal to the programme and viewers. British people will relate to Hollyoaks much more than American TV programmes such as the O.C as it has the British cultural context and viewers like to see their own country portrayed in a TV programme. Hollyoaks is both character and story led as the characters are put in different situations and we get involved in their life and can ...read more.

The major generic conventions are that university students live with friends in a place at university, students like to party almost every night and get drunk and also the pub relates to typical British culture. The camera work in Hollyoaks gives us the feeling that there is only one camera and that we are watching events as they happen. We can observe from a particular point of view rather than seeing events from different angles. In Hollyoaks there are a lot of over the shoulder shots, this allows us to concentrate on the facial response of one character which we can see, it can also mean that we are identifying with the character whose back we see, as they too would be watching the characters reaction. We normally see characters at the same level; this puts us on a similarity with them. The angle of which the camera is placed can affect our emotional response to characters. ...read more.