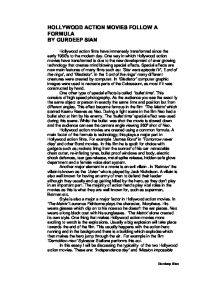 HOLLYWOOD ACTION MOVIES FOLLOW A FORMULA BY GURDEEP SIAN Hollywood action films have immensely transformed since the early 1980's to the modern day. One way in which Hollywood action movies have transformed is due to the new development of ever growing technology that creates mind blowing special effects. Special effects are now main features of many films such as: 'Star wars episode IV', 'Lord of the rings', and 'Gladiator'. In the 'Lord of the rings' many different creatures were created by computer. In 'Gladiator' computer graphic images were used to recreate parts of the Colosseum, as most if it was constructed by hand. One other type of special effects is called 'bullet time'. This consists of high speed photography. As the audience you see the exactly the same object or person in exactly the same time and position but from different angles. This effect became famous in the film 'The Matrix' which starred Keanu Reeves as Neo. During a fight scene in the film Neo had a bullet shot at him by his enemy. The 'bullet time' special effect was used during this scene. Whilst the bullet was shot the movie is slowed down and the audience can see the camera angle viewing 360� shot of Neo. ...read more.

In the Movie Tom Cruise's character was played by a laid back character. In complicated situations Ethan's character did not fluster or illustrate any indication of nervousness. This is apparent when Ethan is in a situation where he is hanging from a helicopter because he must enter a building through the gaps of a vent. A further point which made Ethan a good hero was that he was involved in vehicle chasing scenes. The villain in the film mission impossible 2 was Dougary Scott who was played by the actor Sean Ambrose. For the duration of the last scene a motorbike chase took place involving Ethan and Dougary. During this scene there were numerous stunts carried out on the motorbike. An additional attribute that makes an accomplished hero is intelligence. Ethan illustrated intelligence during these stunts as he created smoke performing wheel spins on his motorbike to block Dougary's view of Ethan. An additional aspect that makes Ethan a typical hero is that he has a love interest in the film. Ethan must save a girl called Nyah Nordoff-Hall the heroine in the film, who is played by the actress Thandie Newton. For Ethan to save Nyah from dying from an infection which was infected into her by the Villain Dougary; Ethan must find a cure but he is not left with a lot of time. ...read more.

Yet when Jack next appears on screen he has cleaned himself and all his mucky clothes with a single tissue. Other typicality's presented in the movie consist of the actor playing Jack Slater is a well built character. Arnold Schwarzenegger is a well built person who has come first in nineteen major body building competitions. Five of those competitions he came first in were 'Mr. Olympia'. This competition is considered to be the best body building competition in the world. The movie 'Austin Powers' was aimed to make fun of the series of James Bond movies. The movie puts forward repetitive elements which occur in all James Bond movies such as the gadgets, girls, and it especially aims at all the qualities and imagery used on the villain. The movies that I have mentioned have presented the audience with an illustration of typical events which come about in Hollywood action movies. Regardless of my opinions I still consider Hollywood action movies to be a highly satisfying source of entertainment. In spite of the movies frequently following a formula it is not necessarily a bad thing as they persistently make millions of money. This means that on the whole people take pleasure in what they see when they go to the cinema to watch a Hollywood action movie. Gurdeep Sian ...read more.