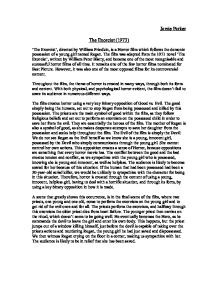 horror in the exorcist

Jamie Parker The Exorcist (1973) 'The Exorcist', directed by William Friedkin, is a Horror film which follows the demonic possession of a young girl named Regan. The film was adapted from the 1971 novel 'The Exorcist', written by William Peter Blatty, and became one of the most recognisable and successful horror films of all time. It remains one of the few horror films nominated for Best Picture. However, it was also one of the most opposed films for its controversial content. Throughout the film, the theme of horror is created in many ways, through both its form and content. With both physical, and psychological horror evident, the film doesn't fail to scare its audience in numerous different ways. The film creates horror using a very key Binary opposition of Good vs. Evil. The good simply being the humans, set out to stop Regan from being possessed and killed by this possession. The priests are the main symbol of good within the film, as they follow Religious beliefs and set out to perform an exorcism on the possessed child in order to save her from the evil. They are essentially the heroes of the film. The mother of Regan is also a symbol of good, as she makes desperate attempts to save her daughter from the possession and seeks help throughout the film. ...read more.

There is an unnatural amount of fog around the house. When he exits the taxi, the shot is from just outside the building; it is late at night and very dark almost to a surreal extent. The lighting is set up to create a strong, spooky image. There is a street light, which is turned on, but a very minimal amount of light comes from it compared to what we would expect. The other light source comes from the bedroom window of the house he is about to enter, which we assume is the bedroom where the possessed child is located. Other lights are seen to be turned on through other windows from the front of the house, but this particular window shoots a ray of light towards the priest exiting the car. As he stands at the entrance to the house, this ray of light causes his figure to look just like a silhouette, creating a dark, spooky image and emphasizing the Horror characteristics. This imagery can be related to film noir. It was such a strong image, that it became the front cover main image for the DVDs, videos, posters etc. that were produced for the film. And as they wanted an image that would show audiences that the film was a Horror, this image was obviously one that spooked and scared audiences. ...read more.

The young girl Regan is smiling all the time, and we witness her and her mum getting excited for her birthday. This equilibrium is disrupted by the evil, in this case the devil possessing Regan. It causes chaos and ruins the happy family that we see at the start of the film. The evil is eventually overcome thanks to the priest, and we eventually see a new equilibrium. The girl is no longer possessed and back to her happy ways. She claims to not remember anything that happened, and the family move away to escape the location in which the disruption formed. This shows how 'The Exorcist' greatly follows the narrative theory seen so often in a Horror. 'The Exorcist' became recognized as one of the greatest horror films of modern times, and inspired many sequels to the film, all seen as inferior to the original. It also inspired imitations, which followed a similar plot or occurrence such as The Omen trilogy, Beyond The Door (74), The Tempter(74), Abby(74), TheDevil Within Her(75) and more recently The Exorcism Of Emily Rose (2005). Before 'The Exorcist', the film Rosemary's Baby Was a successful Horror movie for paramount. It brought horror to the contemporary city with a story about Satanists. And was the landmark film, beginning what was described as a 'family horror'. 'The Exorcist' followed this and both films had children in focus. The films focused on Horror within a family. And due to the success of both, was followed by The Shining (1978) which showed another family in horrific circumstances. ...read more.