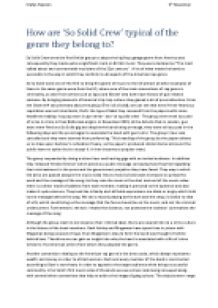 How are So Solid Crew typical of the genre they belong to?

﻿Stefan Newton 6th November How are ?So Solid Crew? typical of the genre they belong to? So Solid Crew were the first British group to adopt the hip/hop garage genre from America and consequently they made quite a significant mark on British music. They were declared as ?The most talked about and controversial musicians of the 21st century?. A lot of what made the band so successful is the way in which they conform to all aspects of the American rap genre. As So Solid were one of the first to bring this genre of music to the UK almost all other examples of those in the same genre were from the US, where one of the main conventions of rap genre is criminality, as seen from artists such as 2pac and 50cent who both have history of gun related violence. By bringing elements of America?s hip hop culture they gained a lot of press attention. From the Channel 4 documentary about the group (This is So Solid); we can see that even if their felonious reputation was not intentional, that?s the type ...read more.

They way in which the lyrics are passed along in the music video links to how So Solid want everyone to spread the word and the message of the song. As they scan the room at the start and end of the music video there is a direct mode of address from each member, making it personal to the audience and also makes it quite obscure. They look like a family and all facial expressions are blank or angry which links to the message behind the song. We see a record playing at the start and the setup is similar to that of a DJ, which could bring us the message that the focus should be on the music, and not the criminal undercurrent. Furthermore, the lyric ?revoke the violence, not promote the violence? summarises the message of the song. Although the group claim to not deserve their criminal label, there are several links to a crime culture in the history of the band members. ...read more.

This can also be seen in the video for the song ?oh no? where vicious fighting dogs are featured in the video which directly relates to a life of crime. A lot of the rap genre consists of embracing your roots and where you come from. In American this usually results to most black rappers talking about the ghetto as their origins. So Solid Crew has replicated this feature as they all originate from Battersea in London. The group embrace this in the music video for Broken Silence as we see shots of the streets and areas of Battersea which we assume the band members lived their childhoods, we even see the insides of local shops. Moreover in the Channel 4 documentary a lot of emphasis is put on the area that each band member grew up in. To conclude, So Solid Crew have certainly adopted all the features of the genre they belong to, and conform to the conventions set by the American rap artists. With the criminal undercurrent that accompanies the band they have been the source of much controversy in their journey from the streets of Battersea, to platinum selling, multi award winning stars. ...read more.