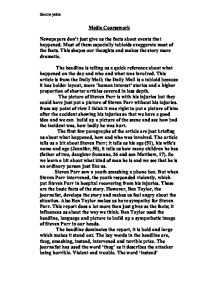 How different variables affect the rate of a reaction.

Media Coursework Newspapers don't just give us the facts about events that happened. Most of them especially tabloids exaggerate most of the facts. This shapes our thoughts and makes the story more dramatic. The headline is telling us a quick reference about what happened on the day and who and what was involved. This article is from the Daily Mail; the Daily Mail is a tabloid because it has bolder layout, more 'human interest' stories and a higher proportion of shorter articles covered in less depth. The picture of Steven Parr is with his injuries but they could have just put a picture of Steven Parr without his injuries. from my point of view I think it was right to put a picture of him after the accident showing his injuries so that we have a good idea and we can build up a picture of the scene and see how bad the incident was, how badly he was hurt. The first few paragraphs of the article are just briefing us about what happened, how and who was involved. The article tells us a bit about Steven Parr; it tells us his age (51), his wife's name and age (Jennifer, 50), it tells us how many children he has (father of two, daughter Suzanne, 26 and son Matthew, 17). ...read more.

Steven Parr's left eye is damaged and bruised, also he is looking directly at the reader with a serious face as if he is saying to us 'look what they did to me!' this shows us what the attackers are like as they had no sympathy for a middle aged man who the assaulted. Ben Taylor uses the picture of Steven Parr to make us turn against his attackers. The picture shows clear evidence of the brutal attack. Ben Taylor wants us to understand that Steven Parr is an ordinary person. He builds up a positive image of Steven Parr by the detail that is given. We learn that he is a family man who has two 2 grown-up children. Steven Parr, 51 years old works as engineer supporting his family. He has a Springer spaniel called Bess, which suggests that he is an animal lover. Springer spaniels are known as gentil and not aggressive dogs, even the name 'Bess' sounds harmless. Newspapers make very good use of quotation. It helps the reader to understand the feelings of the people involved in the stories being told. ...read more.

I thought they were going to kill me." This quotation helps us understand more about how he felt during the attack. His own words 'I thought they were going to kill me' bring his fears to life. They make the story seam more real. They show he has been affected by what happened. The writer allows him to tell the story in his own words. The reporter combines his own story with Steven Parr's own version of what happened. This is effective as it makes the report stronger. The journalist considers the attack dreadful. Using Steven Parr's words also seem more reliable. The reporter's words and Steven Parr's words mirror each other, for example Steven Parr calls his attacker an 'animal' while the reporter calls him a 'thug'. The reporter comments on Steven Parr's shaking voice, which shows us he was still frightened and Steven Parr's story shows us why. The writer establishes Steven Parr as a good, ordinary citizen through information to build up a picture and through quotations and comments from others. The writer also encourages us to feel shocked by the attack on Steven Parr by the language he uses to describe the assault. Also, he makes us turn against Steven Parr's attackers. Sandra yalda ...read more.