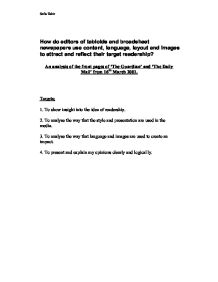 How do editors of tabloids and broadsheet newspapers use content, language, layout and images to attract and reflect their target readership?

How do editors of tabloids and broadsheet newspapers use content, language, layout and images to attract and reflect their target readership? An analysis of the front pages of 'The Guardian' and 'The Daily Mail' from 16th March 2001. Targets: 1. To show insight into the idea of readership. 2. To analyse the way that the style and presentation are used in the media. 3. To analyse the way that language and images are used to create an impact. 4. To present and explain my opinions clearly and logically. British newspapers have been around for nearly three centuries. There are ten British national papers divided into two main categories: the tabloids and the broadsheets. The tabloids contain many articles on celebrities and gossip, some news and many large pictures. The most popular tabloids are 'The Sun' and 'The Mirror' ('red tops'). The broadsheets are larger papers and more serious. They include more news stories and cover politics and world issues. The most popular broadsheet is 'The Daily Telegraph'. The circulation of the national papers has lowered from 15,672,431 in 1989, to 14,270,111 in 1994. This is because there is more technology today. People can receive instant news on the television, radio and internet. It is important for newspapers to know, target, attract and reflect their readership. With this information, they can write articles that interest their readers. It creates an image of what the readers are attracted to. 'The Guardian' is a broadsheet. ...read more.

"May 3 poll date", and "Labour" proves that most of the readers are concerned about politics. I think this is because it is close to the election date, so the newspaper gives the public an update of what the Government are doing, helping them to choose for their vote. Compared with this, 'The Daily Mail' rarely uses incomplete sentences; "...we are asking our magnificent readers to contribute to..." This is the only incomplete sentence but it is used to give an insight of what is yet to come. The elipsis shows that there is more of the sentence to come and prepares the reader for the request to donate to the aid appeal. Emotive language is used in 'The Guardian' to help the reader relate to the story and feel emotional; "There will be many tears around the British countryside...Our farms should be starting to jump with life with new-born lambs. Instead many will feel that their farms are simply 'dead'." The reporter does not use this, but he has quoted Ben Gill as he is biased. This helps the reader understand the story and how it is affecting everyone. Juxtaposition is used contrasting newborn animals with 'dead' farms. This creates a shocking atmosphere as it shows that the disease is ruining spring, by stopping the lambs from jumping with life. Statistics are used in 'The Guardian' to prove a point; "...the number of animals killed under the existing measures rose to more than 219,000...the figure in Dumfries and Galloway at 200,000 sheep in 500 farms..." ...read more.

"Environment correspondent" is mentioned in the by-line to show the readers that he has background knowledge and can write a story that he knows about. This is important to the readers as they will know that they are reading facts about the 'foot and mouth' disease. In 'The Daily Mail', the by-line is quite different; "By Robert Hardman on Dartmoor" There is a photograph of the reporter, which makes it seem personal. The by-line does not say what his job is, but says where he is. This shows the readers that the reporter is explaining what he sees and what he feels. There is an advertisement in 'The Guardian' in the bottom-left corner. It is tall and is about a trip to Copenhagen. This is not really the place people would go for a holiday, so this suggests that, because stereotypically, business people read 'The Guardian', it is a business trip. There is also no information on family tickets or trips for children, so this proves that it is aimed at professional people. In conclusion, I think that 'The Daily Mail' seems to be more effective at attracting readers. It has larger pictures and headlines which attract the reader if what they see is something they are concerned about. However, 'The Guardian' is also effective at attracting readers as the newspaper focuses on politics and interests people who are concerned about the Government. Both newspapers are effective in presenting information, although 'The Daily Mail' would probably appeal to people more than 'The Guardian'. There is less writing in 'The Daily Mail' and it is easier to understand. Sofia Tahir ...read more.