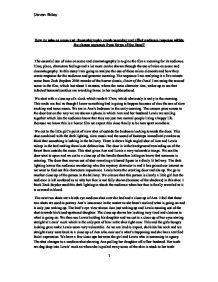 How do mise en scene and cinematography create meaning and affect audience response within the chosen sequence from Dawn of the Dead?

How do mise en scene and cinematography create meaning and affect audience response within the chosen sequence from Dawn of the Dead? The essential use of mise en scene and cinematography is to give the film a meaning for its audience. Time, place, characters feelings and a lot more can be shown through the use of mise en scene and cinematography. In this essay I am going to analyse the use of these micro elements and how they create response for the audience and generate meaning. The sequence I am analysing is a five minute scene from Zack Snyders 2004 remake of the horror classic, Dawn of the Dead. I am using the second scene in the film, which last about 5 minutes, where the main character Ana, wakes up to see that infected humans/zombies are wreaking havoc in her neighbourhood. We start with a close up of a clock which reads 6:37am, which obviously is early in the morning. This made me feel as though I know something bad is going to happen because of also the use of slow tracking and tense music. We are in Ana's bedroom in the early morning. The camera pans across to the door but on the way we are shown a photo in which Ana and her husband Lewis are smiling together which lets the audience know that they are just two normal people living a happy life. Because we know this is a horror film we expect this close family to be torn apart somehow. ...read more.

Obviously with that is not the case in this as she has an evil look about her. We see Lewis fall onto the bed and knock over a bedside lamp with his flailing arms. This gives off a sense of panic, if he just fell onto the bed without knocking the lamp over you would think that he is dead but because of him knocking the lamp we know that he is struggling to stay alive instead of just dying. We then cut to a close up of the girl growling towards Ana. We see in this shot that her eyes are big and dark, her nostrils are flared up and her mouth is completely covered in blood. This makeup makes her seem the very opposite of what a little girls face should look like. I think that this shot is purely to scare the audience and to let them know what Ana is dealing with. Also the camera is using a low angled shot giving the little girl a very powerful image. After this shot we zoom in on Ana who is breathing heavily and looks very scared. We then see the girl jump to her feet and run down the hallway towards the bedroom. This made me feel scared because the girl is running straight towards the camera whilst growling with blood in her mouth. The mise en scene in the hallway is used to make this situation seem as realistic as possible. ...read more.

The light coming from the window makes me instantly think of safety. If she can get out of the window then she will be safe. Ana just about manages to escape out of the window before Lewis can get to her. But when she gets outside there is carnage everywhere. Explosions are going off in the background, people are running along the streets shooting and cars are crashing into buildings. This obviously gives us the impression that it isn't only Ana who is having problems at the moment. She manages to run to her car and drive down the road. We see an ambulance run over a man and a police car spin out of control. Seeing things like that happen to the people you would be relying on to save you would get the audience quite scared and it really gives us the impression that everything is out of control. Ana manages to drive out of the neighbourhood and the opening credits roll. The types of shots used in this scene really show Ana's confusion to the whole situation. There are many close ups which are often used to emphasize the characters emotion whether its anger, confusion or sheer terror. I feel that mise en scene is used in a very intelligent way in this sequence. This film wouldn't be scary if it didn't seem real but the detail which has been put into the bedroom and bathroom really makes it seem like any other home. This is what I think makes the opening sequence so terrifying. ?? ?? ?? ?? Steven Ridley 1 ...read more.