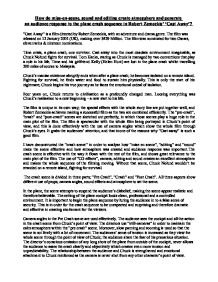 How do mise-en-scene, sound and editing create atmosphere and generate an audience response to the plane crash sequence in Robert Zemeckis Cast Away?

How do mise-en-scene, sound and editing create atmosphere and generate an audience response to the plane crash sequence in Robert Zemeckis' 'Cast Away'? "Cast Away" is a film directed by Robert Zemeckis, with an adventure and drama genre. The film was released on 12 January 2001 (UK), making over $429 Million. The film was nominated for two Oscars, eleven wins & nineteen nominations. Time crisis, a plane crash, one survivor. Cast away into the most desolate environment imaginable, as Chuck Nolund fights for survival. Tom Hanks, staring as Chuck is managed by two conventions that play a role in his life. Time and his girlfriend Kelly (Helen Hunt) are lost in the plane crash whilst travelling 200 miles of course to Malaysia. Chuck's maniac existence abruptly ends when after a plane crash; he becomes isolated on a remote island. Fighting for survival, he finds water and food to sustain him physically. This is only the start of his nightmare; Chuck begins his true journey as he faces the emotional ordeal of isolation. Four years on, Chuck returns to civilisation as a profoundly changed man. Loosing everything was Chuck's realisation to a new beginning - a new start to his life. The film is unique in its own way; the special effects with the whole story line are put together well, and Robert Zemeckis achieves making a successful film as the two are combined efficiently. ...read more.

This generates a feeling of calm and sense of security in the audience as this shows a tedious act and seems as an insignificant act. The shock and surprise of the audience is consequently heightened when the crash begins with the removing of the plaster being an effective contrasting counterpoint to the crash. The crash scene is set out differently in contrast to the pre-crash scene. The calm, secure atmosphere changes abruptly when the change of air pressure and sudden loud noises fill the air. Noise and sound is used in this sequence to reveal the desperation in the crash scene. The sound is used in contrasting manners in both the pre and post crash sections of the scene. The sound before the crash sequence is natural, every sound effect and line of dialogue is clearly heard and the audience feels secure in understanding what is happening. However, when the crash scene begins the sound shifts, only focusing on the predominant sounds in the plane that reflect that the plane is crashing. The directors play around with the noise to create "pink noise" which is all the different sounds heard in the crash scene playing at once. It is effective as it is realistic, and seems like a plane crash, and makes the audience sympathise for Chuck who is yet unsure of what is going on. ...read more.

As the time elapses the audience suspect the worst, so the sound of the life raft bursting accompanied with the shot of Chuck being washed ashore is welcome relief to the tense audience. Computer generated images are used effectively when the plane has crashed and sinking slowly in the sea. The massive waves, engine exploding and plane sinking are all CGI effects. Zemeckis chose to use CGI to produce both the waves and a plane which would continue to suspend the audience's disbelief through appearing realistic in detail and size, while confirming Chuck's shift from controlling to loss of control. The engine breaking and the large metallic sounds of metal breaking are used to compare Chuck with the sounds of large metal. It shows Chuck is insignificant compared to all the large objects surrounding him. The sound contrasts with the Pre crash scene where the use of no music used to create the atmosphere. In the post crash scene, sounds of water, waves and rain is used effectively to give the audience a chance to take the whole crash sequence in, and for them to think about Chuck. The director uses props such as the paddle when Chuck enters the raft. It is useful as it shows that the paddle is completely useless in comparison to the huge waves, and shows Chuck is helpless in deciding his fate. He throws the paddle into the water and hangs onto the raft, clinging to his fate. ...read more.