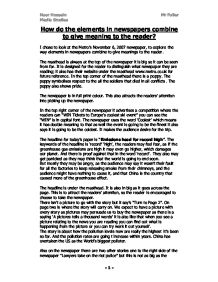 How do the elements in newspapers combine to give meaning to the reader? I chose to look at the Metro's November 6, 2007 newspaper, to explore the way elements in newspapers combine to give meanings to the reader. The masthead is always at the top of the newspaper it is big so it can be seen from far. It is designed for the reader to distinguish what newspaper they are reading; it also has their website under the masthead www.metro.co.uk for future reference. In the top corner of the masthead there is a poppy. The poppy symbolises respect to the all the soldiers that died in all conflicts. The poppy also shows pride. The newspaper is in full print colour. This also attracts the readers' attention into picking up the newspaper. ...read more.

But mostly they may be angry, as the audience may say it wasn't their fault for all the factories to keep releasing smoke from their chimneys, and the audience might have nothing to cause it, and that China is the country that caused more of the greenhouse effect. The headline is under the masthead. It is also in big as it goes across the page. This is to attract the readers' attention, so the reader is encouraged to choose to take the newspaper. There isn't a picture to go with the story but it say's "Turn to Page 2". On page two is where the story will carry on. We expect to have a picture with every story as pictures may persuade us to buy the newspaper as there is a saying 'A pictures tells a thousand words' it is also like ...read more.

The people who are pushing past the police are people wearing suits. You don't usually see people in suits fighting with the police. So this picture will catch the reader's attention as they will feel confused upon the people in suits and police. The second story is to the bottom of the page, "Booby traps, ambushes, and the fear of being maimed and the suffering of loved ones. This is bomb disposal on the front line Page 17". This wants the audience to feel sympathy towards the man and his family in the picture. As he keeps risking his life, to disconnect the bombs. There are two pictures, one of the man and one of the bomb. There are two pictures as one shows the person and the bomb to show "how he keeps cheating death" and how he risks his life to disconnect bombs. ?? ?? ?? ?? Noor Hussein Mr Fuller Media Studies - 1 - ...read more.