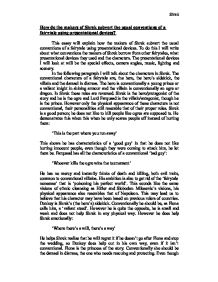 How do the makers of Shrek subvert the usual conventions of a fairytale using presentational devices?

Imitation is demonstrated at the start when a story is being read from a book. This is an imitation of a start to a classic Disney fairy tail. There are changes though; the voice is Shrek's voice, which is a Scottish accent and conventionally in a Disney the accent would have been English. Also at the end Shrek rips out the page, this is done for humour and comic effect. As Shrek rips out the page he also says 'like that's ever going to happen.' This adds irony because it happens to him. Two allusions are created in the scene where donkey flies. There is an allusion from Peter Pan when the pixie dust makes donkey fly and there is an allusion from Dumbo: 'You may have seen a house fly, maybe even a superfly but I bet you've never seen a Donkeyfly' This is done for humour and comic effect again. There is also an allusion that hints at another movie, which is not a fairytale: 'You're going about the right way for a smack bottom.' Shrek says this line to donkey. Shrek's voice is done by Mike Myers who also stars in 'Austin Powers'. This line sounds like something that his character, Austin Powers, would say. ...read more.

Bullet time, a technique where the action is slowed down, is also used when Fiona, Shrek and donkey are running away from the dragon; this is also used for humour. Different camera angles are also used for humour. When we first see Lord Farquaad a low angle shot is used to give the impression that Farquaad is a tall man, the camera then pans vertically upwards to reveal that Farquaad is actually very short. This is also for humour. When donkey first meets Shrek a vertical pan is used from the eyes of Donkey. It shows how large Shrek looks from Donkey's perspective and adds to the humour when you see that Donkey is still not afraid of Shrek. Shrek has taken all of the normal conventions of fairytales and subverted them very well to create humour. It has used characters from original fairytales to play on the audiences' expectations and then changed the characters slightly, away from the audiences' expectations, to add humour. It copies classic fairytales as well as modern day movies, such as 'The matrix', and combines them in an original fairytale. It reverses the roles of ogres and princes and goes totally against all conventional stereotypes. I think that the makers of Shrek were successful in creating an unconventional, exceptionally funny fairytale with a twist. Shrek ...read more.