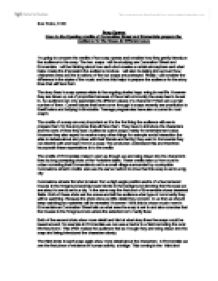 How do the Opening credits of Coronation Street and Emmerdale prepare the Audience for the Soaps in Different ways.

Soap Operas How do the Opening credits of Coronation Street and Emmerdale prepare the Audience for the Soaps in Different ways I'm going to compare the credits of two soap operas and consider how they gently introduce the audience to the soap. The two soaps I will be studying are Coronation Street and Emmerdale. I will be thinking about how each shot creates a certain atmosphere and what helps create the impression the audience receives. I will also be taking into account how characters lives and the locations of the two soaps are portrayed. Finally I will consider the difference in the styles of the music and how this helps to prepare the audience for the story lines that will face them. The story lines in soap operas relate to the ongoing stories happening in real life. However they are blown up out of proportion because of the small community the soap has to be set in. An audience can only appreciate the different values of a character if there are a small number of them. Current issues that have come through in soaps recently are prostitution in EastEnders and bullying in Brookside. ...read more.

This effect makes the audience feel as though they are being drawn into the soap and being introduced the characters slowly. The third shots in each soap again show more detail about the characters. In Emmerdale we see the first piece of evidence of human activity, a bridge. This coming in the third shot contrasts with the houses shown in the first shot of Coronation Street. This method connotes in Emmerdale the difference between the vast country side and the small village. We see the first evidence of the type of story lines in the third shot of Coronation Street as we see telephone wires, this connotes the daily activities and lives of the community. Shot four, five and six of Emmerdale are again leading us closer to the village, starting from an image of a road and a river giving us a vague idea of the community to an image of a car. Because Emmerdale takes more time to get to the community and therefore has more shots than Coronation Street it again shows the audience the difference between the rural village Emmerdale is set in and the urban vast city Coronation street is set in. ...read more.

The third image for shot five and six is of a woman slapping another, this shows arguments, fights and anger between two people living in the community. Shot four for the next two scenes is of a women praying, looking very upset. This shows tragedy, concern, betrayal, basically any bad or upset feeling. The next image is of a man jumping for joy, this contrasts to the last image as he is experiencing good feelings. The last image is of a man and a woman hugging and laughing together. This could, like image one, show the importance of family in the community. I feel these super imposed images improve the credits by focusing in more on the factors that audiences expect to see in the soap. The instruments that play the theme tunes and the way the instruments play are also conciderd by the producers. For example the brass family was chosen for Corronation Street to show a homely and urban feel where as the wind instruments for Emmerdale indicates the rural community. I think that Emmerdale prepares the audience for the soap more efficiently than Coronation Street does. With use of the super imposed images. I also like the soap Emmerdale better than Coronation street and I think this shows the importance in the shooting for soaps credits. Kate Parkin, 11HB ...read more.